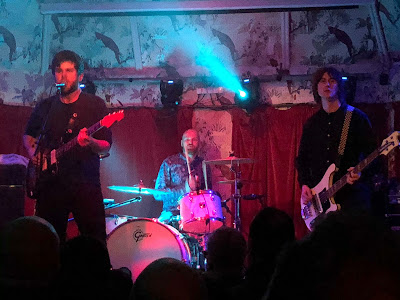 Déjà Vega played the biggest show of their career to date with a sold-out months in advance headline show at The Deaf Institute in Manchester on Saturday to conclude a successful nationwide tour in support of their new single Who We Are. Support came from Football FC and The Big Peach. 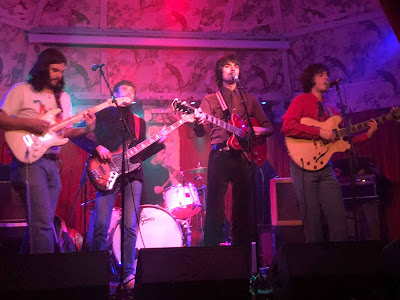 The Big Peach open up the evening and their heavily sixties and seventies-influenced vibe is the perfect start to proceedings. They teeter on the line between overdoing their influences and creating something fluid and uplifting and come down on the right side with songs like L'il Suzie, Trainspotting, Sad, Run And Hide and All You Got To Do Is Ask. Their prolific nature and effortless ability to craft such songs means they've already moved past their debut album which only came out last year. Exchanging vocalists and with a three-pronged guitar approach that unusually doesn't feel overpowering, they provide a light entree to the destruction that's set to come.

Football FC have travelled up from Bristol to play to what they describe as the most people they've ever played to (which makes them "feel like Take That"), and they initially fail to warm up the Manchester crowd who seem strangely indifferent to them. They ask who liked The Big Peach and when no one responds they tell us they're not going to ask us any more questions. And instantly we love them in that moment. They possess a rabble-rousing sound that befits their band name, think early The Twang as a start point, but there's a real energy to their performance that very much reflects their own effusive personalities. They do win over the crowd by the end but it's by sheer force and will - and it's impressive that they've come so far from home and taken on a crowd and won through. 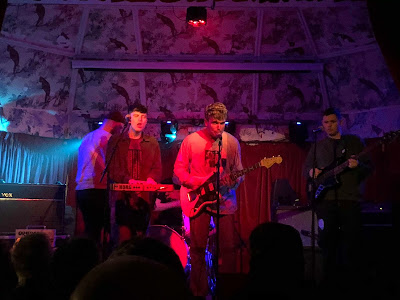 Everything seems to be falling into place for Déjà Vega, they're riding the crest of a wave at the perfect moment, the afterglow of their debut album still blinding many newcomers with light whilst they have their follow-up to unleash on an unsuspecting public. Gone are the days when they'd open in a basement venue across town to ten hardy souls who wondered how a band so viscerally absorbing could be cast in such an unrewarding role. Now they sell out these shows, growing in size each time, in the blink of an eye and are taking that across the country impressively. Tonight feels very much like a stepping stone rather than an end point.

That indifference in the crowd seems to linger for a couple of songs at the start, although it's nothing to do with the onslaught that's coming from the stage as Telephone Voice and Mr Powder open up the set in explosive style. Perhaps the way in which Jack's fingers somehow seem to be in about six places at once on his guitar is so visually overpowering that it simply stuns people to gaze in awe. Once they get going and a Déjà Vega flag is unfurled and passed around the venue then the place descends into a frenzied moshpit that threatens to envelop the whole of the standing space.

Spitting Gas and recent single Who We Are give a taster to the second album that's coming soon, and what both of them show is that the record will have many of the traits that have drawn people in so far, but they also demonstrate the band pushing the boundaries of their sound further, a little more experimental but also focusing outwards to draw people in. 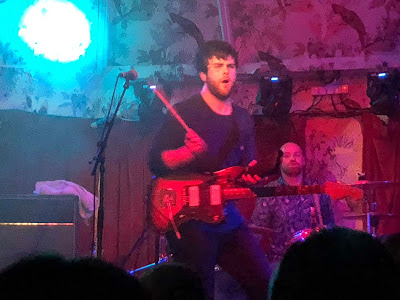 Chasing and People In High Places really set the place bouncing, the Deaf's wooden floor creaking under the weight of bodies pounding. There's a real contrast on stage, Jack is like a man possessed while Mike and Tom, connected to their brother by an umbilical musical cord, look focused on what they're doing and oblivious to the melee in front of them, but their rhythm section is as vital to this band and their sound as their manic front man.

Three more new songs - Harmonia, Balancing Act and Seeing Double - follow, each brimming with tension in the verses before the inevitable tsunami of the chorus when all hell breaks loose. Whilst the formula might be the same in many of these songs, the variables come from so many different angles that you're blown away each and every time.

Even in the moments of respite when they slow things down, you're waiting for the next wave to come and lift you away and the crowd's energy is so powerful that it's impossible not to get swept away on it. Eyes Of Steel could well describe Jack's stare as he shoots the lyrics like a bullet from a gun over the top of a now heaving mass of bodies for their penultimate onslaught.

They finish with their customary finale The Test. The only thing customary about it mind is the position it occupies in the set. Each time they take us on a winding rocky journey through their creative thought space at ear-shattering volume and at such a pace that you're lifted up and carried along on it. Jack jumps into the crowd, guitar in hand, as the song takes us down one of its twisted diversion routes, risking life, limbs and his precious axe in the process. It takes one final turn and crashes to a halt in a wall of feedback and then they're gone. But you know they'll be back, in a bigger room somewhere in town very soon, such is their unstoppable momentum right now.