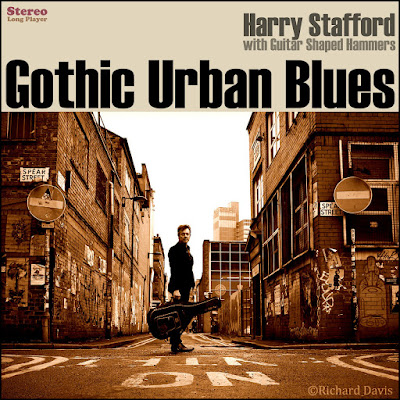 Harry Stafford might be known to some of you as lead singer and guitarist of cult Manchester 80s band Inca Babies. He's continued to make music, most recently under his own name and last Friday he released his latest album Gothic Urban Blues made with his band Guitar-Shaped Hammers. Harry took time out from isolation to walk us through the ten tracks that make up the record.

Guitar-Shaped Hammers feature Harry on vocals, guitar, piano and keyboard, Rob Haynes on drums and percussion, Vincent O'Brien on slide, lap and blues guitars, Nick Brown on bass and guitar and Kevin Davy on horns. They recorded the album in several sessions over a number of months at Ding Archer's 6dB studios in Salford last year.

Talking about the album and the recording sessions, Harry told us "It was important to reassemble these musicians again as there was a lot of ground we hadn’t covered (with previous album 2017's Guitar-Shaped Hammers). I had about fourteen songs and selected ten to be on the record. They were songs I had been playing around the bars of Manchester in order to hone into a neat arrangement."

"I was able to rehearse with Rob and Vincent and we laid down a foundation with which to allow Nick and Kevin add their unique elements. I should add that their parts were there to compete and yet to complement each other. Kevin is a hugely in-demand Jazz musician who graces the funk of Cymande and the smooth grooves of Lamb. What I wanted from Kevin was for him to radiate his love of Miles Davis and send a wave of Goosebumps and steely soul through the spine of the sound. Nick with a guitar born of jagged punk and sinister drones was to create a brittle edge to balance the beauty."

"Recorded at Ding’s 6dB studio in Salford, we used four days of recording and three days of mixing over three months. Ding’s days in The Fall and with the PJ Harvey band brought to proceedings a certain distinction we might not have got anywhere else. Indeed, his vision helped shape the dynamic balance and tone of the record. The time between studio visits also allowed me to mull over the recordings at length and ultimately get exactly what I wanted. The results are satisfyingly circumspect."

"Gothic Urban Blues is about the Metropolis, the naked city, the urban sprawl and the need to get back to the ripped back streets when you’re far away. If there are a million stories in the naked city? then here are a few to keep you warm."

Harry then proceeded to walk us through each of the ten tracks in order. Listen to the tracks via the Bandcamp link above as Harry explains a little about each of them.

She Just Blew Me Away - This is dedicated to Jim the singer, who would tell me stories of his love affairs. He would begin with. “I mean, she just blew me away”. And how did it end? I would ask. “Ah well, she just blew me away.” Jim the singer always considered himself a lady’s man, to be fair to the chap he was quite successful, and in his eyes he was a Casanova, but to everyone else he is the kind of guy who exists Wandering around in a druggy fog of ugly sex, self-harm, and forever-February malaise. Not a role model. To paraphrase the great Willie Nelson: “Ninety percent of the people in the world end up with the wrong person. And that’s what makes the jukebox spin.”

Cruel Set Of Shades - So many iconic portraits of people with shades, this is a short tribute to the art of wearing shades. The windows to the soul are blank and cruel. From the man with no eyes in Cool Hand Luke to Lou Reed checking out the girls, to the aviators dropping the bomb on japan and a thousand other reasons why we wear shades. And sometimes when It’s sunny!!

Gothic Urban Blues - This is the city viewed from a futuristic hover car or spaceship or obscure superhero. We have sprouted wings and become unclassifiable creatures swooping between the towers and looking down at the insects below. It’s also a groove on city life and walking in the traffic and the noise and the people. Something we won’t be doing for a few weeks yet.

Painted Ocean - I like many people was so horrified when they showed those pictures of plastic bottle oceans. This song is a riff on the painted ocean of The Ancient Mariner and the horror of a trash filled dump of a sea, but despite this floating garbage dump the Ocean takes me back to You...

Infinite Dust - Lost on a Luna landscape, I trying to get back to the city, can you hear the heat rasping off the tarmac of a two-lane blacktop? The blue, sky jet streams, a country song so slow it might stop at any moment. My little house in the wilderness, like a cracked ceramic in an infinite kiln.

Black Rain - This song was written by a friend of mine called Phil Shoenfelt. It was about his experiences of bad medicine in New York when he was a youth. While I don’t share his chemical experiences, the song reminded me of a general melancholia that was hard to ignore, so I had to do my own version of it.

Sideways Shuffle - Kevin our trumpeter is a stone cool jazzer, his very existence is to find a groove, he thinks in syncopation, the cat can blow. So, in a way I wrote this for him to riff around. Kevin Davy is a trumpeter in the Miles Davis mode he soars and jags with the mood of the moment, but at the same time he is unafraid of the deafening silence at the edge of the sound, maan. This owes a lot to Barry Adamson who is just a genius (much overused) but often somewhat overlooked as to this true worth.

Disappearing - Is about a female James Bond, if you see what I mean. She can’t possibly want to be like Bond as he’s such as prick, so she does thing her own way. But in a stupid world of machismo bullshit she has enough and spends all her efforts on a case of disappearing and tells them they can stuff their espionage up their arse. But of course, they will send someone to ‘get’ her.

Man In A Bar - This is Jim the singer's best mate who is a bar fly always getting into fights. He doesn’t mean to; he often tries to stop fights but ends up in the middle of a ruck. Another of those characters who was always in the pub, until one day he simply vanished. I hope he went somewhere nice.

Into The Storm - This is my ode to barroom balladeering , I have been playing this song for the last two years in pubs and bars across Manchester. I like the idea of having to go out into the storm even though it safe and warm in your house in the city. Of course, it’s a metaphor now to stay home, as there is a new quiet storm raging outside. Stay home, wash your hands.

Gothic Urban Blues is out now and can be purchased on vinyl, CD or download from Harry's Bandcamp, where the previous album Guitar-Shaped Hammers is also available.