The Slow Readers Club - The Joy Of The Return 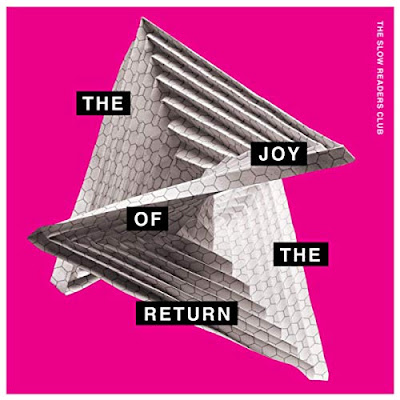 The Joy Of The Return is The Slow Readers Club's fourth studio album and their first as a full-time band as they aim to follow-up the chart success of its predecessor Build A Tower. Across eleven songs they explore the state of the world, the obsession with social media and the divisive atmosphere it creates as well as revisiting some recurring lyrical themes with a more adventurous musical mindset that's been afforded to them as a full-time band.

When The Slow Readers Club's third album Build A Tower hit number seventeen in the album charts on the week of release, it felt like a triumph of the underdog. Many years of hard slog, opening up shows to a handful of diehard fans, slowly building a fan base that sold out increasingly bigger shows in Manchester, getting a break with the offer of a nationwide tour with James that gave them access to a wider fan base and of course the immediate quality of tracks from their self-titled follow up Cavalcade all came together to create one of the most unlikely success stories of the last decade. We knew they were good, but that's never been a guarantee of success in the music business. Fast forward two years, they've sold out the three and a half thousand capacity Apollo, toured the UK and Europe extensively and given up their day jobs and gone full time. As they approach the release of their fourth album The Joy Of The Return, it feels like the pressure is on them for the first time to deliver, the expectations raised higher than ever before and the glass ceilings of the industry above them a little more shatterproof than those they've smashed through so far.

The album's focus has widened significantly lyrically since the early days of the band. Where On The TV on Build A Tower Aaron declared "the world is on fire and we've gone insane", The Joy Of The Return delves further into the abyss that is modern society. On latest single Killing Me he declares "the kings sit pride of place far above the chaos" aimed at the way the elite protect themselves from the effects of their own actions while the rest of us are so engrossed in our phones to raise our voices in protest - "Silence is killing me killing me, driving me mad. Son I'm a slave to technology, talk through the glass."

Zero Hour tackles the way social interaction is so blinkered, black and white and lacking in nuance and laced with intolerance and hatred towards anyone who dares have an alternative opinion - "I don't want to be here, you call me out, you call me a coward, think you could go a day without freaking?" and Idols' uplifting musically buoyant chorus contradicts itself with the ominous "waves of anger rise to drown us all" whilst Every Word speaks of "see the world in flames like an esoteric nightmare or a fantasy." No Surprise talks of the way "algorithms filter our reality" as Aaron sings "I looked out on the horrors of humanity, a vile and vivid dream, the greed was so obscene, all men conspire to cultivate a tragedy" whilst "my mouth was shut, my hands were tied, a little love would serve us well." All of this feels even more prescient in the time since it was written.

It's a theme that runs through other songs on the album - the lead single All I Hear, for all its anthemic qualities driven by the insistent keyboard line that runs underneath, directs its anger towards the sense of helplessness at the state of the world and the inability to affect change as an individual against the wall of noise emanating from bots, politicians and the media whilst Jericho touches on the impact of the constant barrage of information aimed at subverting opinions - "I’m nervous as hell and all around the people talk in code affecting my health."


If you're worried that Aaron is turning into Bono, then the rest of the album will assuage your fears somewhat. Something Missing is a tale of a man seemingly born with everything yet who despite all that has a gaping hole in their life that people oversee because they focus on the material things rather than the emotional ones. The album's final track The Wait is classic Readers, from the keyboard line that underpins it through to the lyrical theme "I wait for the kiss, the taste of your lips, I'm in heaven" of unadultered love that ran through the likes of Forever In Your Debt and You Opened Up My Heart as the chorus declares "now you're here, you are all that matters." Problem Child is darker and deals with the treatment of a girl born with special needs whose behaviour gets her into trouble and the lack of empathy towards her and her parents.

The widened lyrical focus of The Joy Of The Return is matched by the music. Whilst the huge singalong choruses that have characterised previous The Slow Readers Club albums are very much still in evidence, the eleven songs that make up The Joy Of The Return are a little lighter of touch than its predecessor. There's subtleties that reveal themselves on further listens on the likes of Paris, Every Word and Zero Hour that come with the time the band have had to make this record as full-time musicians rather than snatched hours between work and sleeping. It all goes to making The Joy Of The Return a little less relentless in pace than its predecessor, an album that will take time to reveal its full beauty to you but one that will ultimately be even more rewarding and sure to delight their current fan base and attract new devotees to the READERS army of followers.