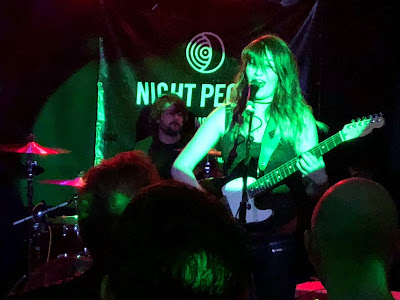 Rews brought their Phoenix tour to Manchester's Night People on Friday night. The new three-piece line up came with a far heavier rockier edge to them, giving us pumped up takes on tracks from their debut Pyro and their forthcoming as-yet-unannounced follow-up.

There's a real sense of anticipation for Rews as they make their way through the crowd, carrying flags to be used later in the set on a new song Warriors, that translates into a huge reception at the end of each song. The room might only be two-thirds full as the first pieces of shit start to hit the fan with coronavirus and some people stay away, but there's a real sense of love towards the band in the room that's palpable. It comes from the connection they make with their audience, a huge grin never moves from Shauna's face from the start of the set to the very end and when she's at the merchandise desk later on. Rews want this to be fun, they're having fun and they implore you to do the same.

With Ele and Scott in tow, the noise is cranked up to the maximum and this feels much more like a hard rock show than any Rews gig we've been to before. The shinier edges have been knocked off songs like Miss You In The Dark, Rip Up My Heart and Death Yawn and they become full on sonic assaults that threaten to knock out anything that gets in their way, particularly when Ele jumps out amongst us forming a circle around her. The new material - Bad Girl, Monsters and Razorblade in particular - really hammer that new approach home and the crowd's response shows that it's heading down the right track. 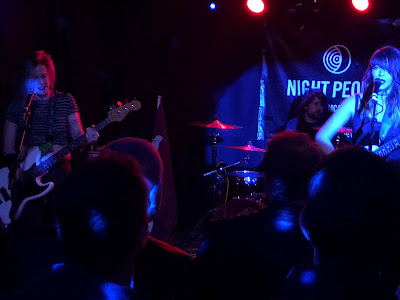 There's a touching moment mid-set when their sound engineer has his twenty year old pony tail cut off on stage by Shauna to raise money for bowel cancer research.

There's one softer moment musically where Shauna takes to a set of keyboards down the front of the crowd for a stripped down version of Pyro's opening track Let It Roll.  They joke it's the most rehearsed bit of the evening as it takes a while to set up, but it demonstrates the way the three of them have bonded so well. It's a breather though as there's no respite once she's back up on stage and Shake Shake does that to the venue's foundations, such is the volume and power that the three piece generate. Warriors sees them get the flags out and all three of them play the part of drummer in a song that would seem certain to be a single at some point in the future.

The hour-long set flies by, the energy coming from the stage never dropping and you're drawn in by both Rews' unflagging enthusiasm and feel-good factor and the uplifting nature of the songs. Whilst Rews might have changed in shape and form, the ethos and enduring qualities of the band are still very much intact.

They played Itch, Violins, Bad Girl, Miss You In The Dark, Rip Up My Heart, Your Tears, Heart Is On, Death Yawn, Let It Roll, Shake Shake, Monsters, Warriors, Razorblade, Birdsong and Shine.