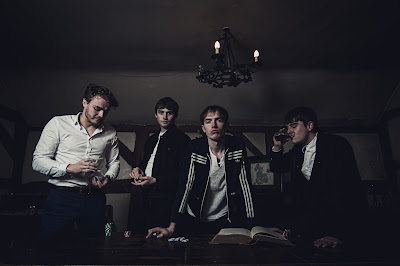 As Scuttlers release their latest single Leaders Of A Lost Generation ahead of a headline show at Manchester's Night And Day on March 21st, we caught up with Kaiden for a chat about the single, how the song reflects what's happening in society today and their plans for the future.

You've just released Leaders Of A Lost Generation. Could you tell us a little about what the song is about?

Leaders is a song that suggests a meaning to the madness of being born at the kick off of the 21st century. Twenty years in and the world is constantly changing around us. With this song I intended to shed light to the cultural question: We had the swinging 60s and the raving 90s, what’s the banner that we can put over this period in time?

We understand it's a song you wrote when you were fourteen - why have you decided to release it now?

It’s a blessing that the single has been released at this time - because it couldn’t be more relevant, I think the song has gathered more meaning to me through the years as well as the listener. It felt the right time to unleash it to the world with all the bells and whistles attached.

Do you think it's important for the young to make their voice heard - given that the older generations seem to have made a mess of things?

Definitely. It begs the question of whether we would do a better job - I’d like to imagine we would. It’s a counterbalance between having the drive of the young mixed with the wisdom of older generations. Maybe the older generations tend to dismiss the young to the point of such division. Hopefully that’s a lesson we will learn in the future.

And equally, does that apply to musicians?  You were involved in Socialist Sunday back before the election last year, but there was a real dearth of bands making their voices heard - and now the Brexit ramifications for the industry look like they're going to be quite restrictive?

It seems that the Stormzys and the Daves are providing a voice for the youth of today which is monumental. Maybe what we need is some Rock n Roll to make people happy and offer some fist-punching meaning to their life. I’m not going to sit here and comment on the effect Brexit has on the industry because I genuinely have no clue on the matter. If they stop us touring Europe then that’s when I’ll dig out my pitchfork.

Musically the single is going into new territory, particularly in the second half of the song. Is that a conscious direction that your new songs are moving in, or is it specific to this song?

Even with the acoustic version it still screams out the potential of a full band anthem. After a year or so of practicing the song with the band that was the final product. The more we write, the more daring places we travel. Quite a lot of it was thought of whilst recording, its a whole different beast when you’re composing on impulse in the studio.

You're headlining The Night And Day on March 21.  What can we expect from that show - will we get to hear some new material amongst the established favourites?

That set is going to be huge. We have four or five new tracks to play alongside our more familiar numbers, from songs that have were written three years ago to three days ago. it’s all very exciting and I can’t wait for that show. Everyone who buys tickets is guaranteed four lads putting in the hours for them to have an absolute ball.

Since your debut EP, you've released a number of singles, are there plans to release a bigger piece of work, whether an EP or an album, in the near future?

An EP may be coming in the summer. We have recorded four more tracks with the marvellous Gavin Monoghan at Magic Garden studios in Wolverhampton. What we do with them is still in the pipeline. We’ll see where the hammer falls there after.

If you look back at Scuttlers from when you first started off, where do you think you are now as a band compared to when you started and what lessons have you learnt from being around the local scene in Manchester?

We have gathered a lot more experience for sure, we’re on a journey and can feel ourselves improving with every show. Me and the lads are confidently going into the studio with a visualised shared goal, rather than us being shaky with the new experience. Added to that - our live show has grown with our writing, plus we’ve finally managed to get some much needed new equipment, so we’re a different animal live now, or will be in time for the headliner (I hope!).

Theres a lot of sound as fuck people in the Manchester music scene. What I’ve learnt is that talent breeds talent. So many bands deserve success in this city. You have to work harder than anyone on the planet to get what you deserve.

Email ThisBlogThis!Share to TwitterShare to FacebookShare to Pinterest
Labels: Scuttlers