TRACK OF THE DAY 2 : Koala Club - No Surprise 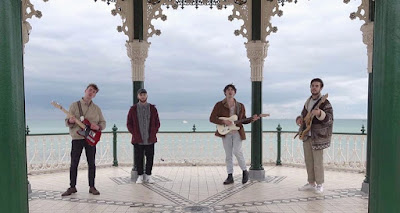 Koala Club's second single No Surprise follows hot on the heels of January's 360 single and part of a series of releases planned through 2020. It's got an earworm quality to it from the jangling guitars at the start into the chorus - and looks set to build on their growing fan base and local radio support from the likes of BBC Introducing.

The Brighton based band comprises James Grimsdale on vocals and guitar, Doug Stokes on guitar, Lewis Phenix on bass and Toby Jones on drums and percussion and have been going for just over a year describing their sound as "bringing catchy riffs and singalong lyrics with the sole intention of creating feel good music."

James explains the meaning behind No Surprise - "It’s about seeking truth and honesty. About losing the lies that are spoken to make you feel better momentarily, moving on and getting rid of toxic relationships in your life."