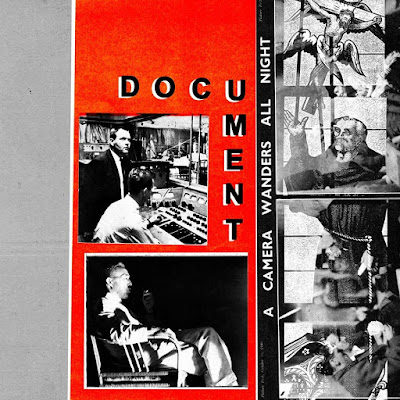 Document released their debut EP A Camera Wanders All Night last week. Across five songs the Manchester-based five-piece set their own punk agenda that stands them out from many of their contemporaries with a uncompromisingly violent brutalist approach to their art that forces you to stand up and listen to them.

Opening track The Spy That Came In From The Cold is a statement of intent, drums that punch and get you right in the heart, setting the scene with a desolate lonely landscape being created around it before the walls start to cave in and overwhelm. That it's a minute and twenty seconds before we hear from Alex, almost shouting to be heard above the towering rooftops that his band have built in his absence, the drum beat creating a sense of returning to the same place, dropping further into the abyss, drawing you in whilst the guitars add a sense of overwhelming chaos that pervades into the vocals as the song obliterates everything in its path as it reaches its conclusion and fades away.

The World Until Yesterday emerges as you turn the corner, a behemoth of a track, guitars and drums creating a wall of sound that propels everything along under their momentum, Alex declaring "I'm terrified of everything, repeating my every sin" as he picks over the state of the world. It feels very eerily prescient of the current situation as it talks of people saving themselves from the disaster with little regard for others. Pity clocks in at under two and a half minutes and feels like the place where everything becomes disconnected, Alex spewing out lyrics that are often indecipherable under the menacing drums and screeching guitars in parts before they dissipate for moments of clarity. It doesn't really resemble a song in many respects, but somehow makes perfect sense in the context it's set as it ends with a repeated riff as all around it drops away.

Uncle Sam's Daughter sees Document take a more reflective approach without dropping the claustrophobic intensity of what's gone before "the tender lips upon your angelic soul, all this acquisition has really taken its toll"  and reflecting on the way in which people are willing to settle for something that really doesn't satisfy them wholly - "I've been dreaming of a suburban life for you and I where we pretend everything is alright." They use the music to perfectly capture the tension inherent in the song, once again using the drop down and the drums coming back in to hold the listener absolute captive in their cross hairs.

American Heat concludes the album, a half-spoken half-sung track that's carried along under the substantial weight of its own momentum as it rails against the injustices of the world, always seemingly on the edge of either breaking down or soaring off into the distance, as guitars dance underneath the drums and then raise their head for their moment and then sink back down. By doing neither it holds you tight in its grip as the guitars take over as Alex takes a step back, after menacingly talking of "an eye for an eye, a tooth for a tooth", as he did at the start as the EP comes to its close.

A Camera Wanders All Night is an angry record and exactly what is needed now in these uncertain times. Its uncompromising nature, the way they create a huge sonic wall through which Alex often struggles to be heard, or at least understood, is part of its attraction. It pays no dues to the conventions of what you should be doing if you want your music to be heard. It does so because Document know that the record, like a river, will find its way from the source to the point at which it tips out into the sea as it follows its own path, gathering momentum on the way. Its starkness is a refreshing antidote to the sugar coating that needs to be applied to music to make it acceptable to radio these days - and for that reason it might just be the most important debut release of this year.

Email ThisBlogThis!Share to TwitterShare to FacebookShare to Pinterest
Labels: Document