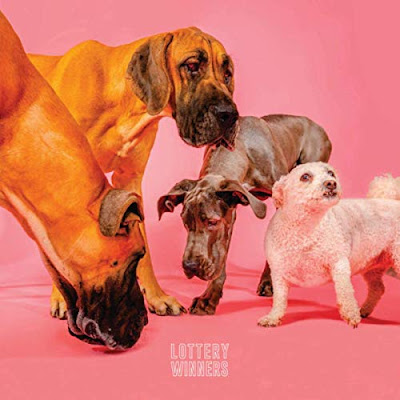 The Lottery Winners' journey to releasing their debut album has been a long and winding one, full of pitfalls like a game of Snakes and Ladders, but Friday sees the happy ending of it finally being realised, a well-deserved triumph of an underdog who battled against the odds, the glass ceilings of the music business to create an album that's full of their DNA, blood, sweat and guts and sure to delight their growing fanbase.

It's taken Thom, Katie, Robert and Joe twelve years to get to the point of releasing their debut album. When they started off, it was hard to determine whether they wanted what they've got now - a record pressed on vinyl, a tour that will conclude with a show at Manchester's Ritz that's certain to sell out - or whether they were doing it for fun. They always had songs, and some have made it all the way here and the likes of Pillow, not included here, are still around and seducing fans who've joined them en route, but their live shows didn't always do them justice. A few years ago though they refocused, got signed to a major, managed to escape from it with the album when factors out of their control made everything turn sour and find a label to release it and support them.

The album is a triumph across the twelve songs, beautifully crafted songs that are upbeat, catchy and with choruses that you could imagine audiences singing from the opening song of a show to the celebratory encore. Thom's vocal stands tall, dead front and centre, rich, expressive and confident, singing about subjects that matter to people living their everyday lives, Katie's vocals adding depth and lift in the background and the band sounding as coherent and together as you'd expect from a band that's been together so long and have grown up into the band they are as a four.


The Meaning Of Life starts with some almost gospel vocals and an uplifting hook line that runs through the song. Thom muses on moving away from home and hating it; the pride that the band have in their native Leigh is one of the most endearing things about them. References to the "same clothes hanging on the line, washed and dried a thousand times" and "we came from nowhere and nowhere is where we'll stay and I've never felt more alive" show that they're genuine in that affection for the home town. That sense of happiness with their lot continues lyrically in Little Things - "there's nothing better than the little things" making references to birds making the same noise in the morning. What's not little is the scale of their sound, bold, confident and perfect for both radio and for an audience to join in - the connection made by both words and the tune.

21, whilst ostensibly about being young, has many of the same themes - "write our names on the back of the bus, baby this town was made for us", dancing by the kitchen sink rather than a swanky night club - and the hook line that draws you in. I Don't Love You feels more personal, about a relationship where Thom thinks the woman is too good for him, but loves her and thinks she shouldn't want him but she does - so the outcome is positive.

That's Not Entertainment is a rant at what counts as entertainment these days - whether it be the songs on the radio, people being on TV because they're pretty or willing to take ten minutes of fame to ruin their life, bands in leather jackets that all sound the same - articulately pulled apart as it describes how people have to switch off to make the supposed entertainment work for his generation. He cleverly adds in references to the worst offenders - "I don't want to come to your Love Island, I don't want to Come Dine With You, I don't want to meet your Big Brother and I don't care what Loose Women do."

Headlock is a love song, full of real-life rather than soppy romantic references to the object of Thom's affections - "there's nothing that I won't do, to be next to you" - guitar, drums and backing vocals collide before it's taken to its end by the song's earworm riff. 18s to 30s goes back to the generation that he sings about in 21- singing about coping rather than living in a world because of the restrictions society have put on them that didn't apply to their parents. It's a social commentary that rarely gets heard - "they never taught us how to live at school" making people unprepared for real life. The end section rues having no money, no car and friends but couches it in music that's uplifting in contrast.

In contrast,there's an unbridled optimism in Hawaii, where escaping much of the mundanity that's been described in the other songs and the endless wait through the year for a holiday that you spend the year paying for is replaced by moving to Hawaii and making a new start like a fairytale to aim for.

Elizabeth is one of the oldest songs on the album, one that will stand out to those who saw them playing to a dozen people when where they are now was just an optimistic dream. Where many bands end up killing off what makes those early songs special with bigger-budget production, The Lottery Winners manage to retain all its magic and make it sound crisper and clearer. I Know is another older track that has also kept its magic - lyrical references to dogs chasing sheep, a wonderful section where the vocals dual and it lifts everything and the production still retaining the youthful innocence of the song's sentiment.

My Only Friends deals with a recurring theme - "everyday I push you away" being the main theme, dealing with a sense of feeling not good enough for the people in Thom's life when the converse is true in reality. The album finishes on Young Again, and once again it talks about the troubles of growing up in these times. This time Thom sings about living the nine to five boring life, not grabbing opportunities and taking a chance while you still can and the possibility of going to sleep one last time wondering "what if." The Lottery Winners' final message is a positive one on the album - live for the here and now and deal with the consequences.

From a band that took a long time to be considered seriously despite the fact they wrote songs with simple yet addictive hooks and clever, but not too clever, lyrics that people of all ages could relate to, The Lottery Winners is a triumph, especially given the battle to take back control of it and be able to release it. It's gloriously uplifting, puts a smile on your face, gets your feet tapping and has you singing along to words you've only just heard. It's a dream come true for the four of them and you'd struggle to find a group that deserve that more.