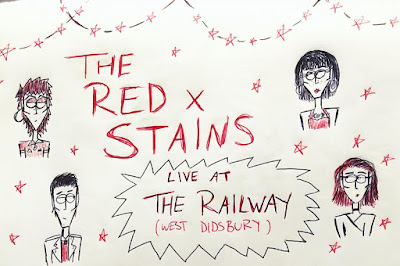 The Red Stains are one of the hottest most-talked about new bands in town at the moment, having secured a Kendal Calling appearance without a published record to their name. They precede the release of their as-yet-unannounced debut single in April with a couple of live tracks recorded at The Railway Inn in Didsbury last November on their Soundcloud. Mother's Ruin sees Natalie lament on how she's been a disappointment to her parents.

Mother's Ruin shows the sparse spindly side of The Red Stains' work and Natalie's unmistakable Scottish accent as she sings about getting drunk and upsetting her parents. It's tongue-in-cheek in parts, but with a message to take the band seriously as she aims her vitriol at four guys with guitar bands.

They play Manchester Off The Square (March 18), Manchester Night And Day (April 24) and Glossop The Globe (May 15) and Manchester Psych Fest (September 5).

Our review of the show where the track was recorded can be found here.