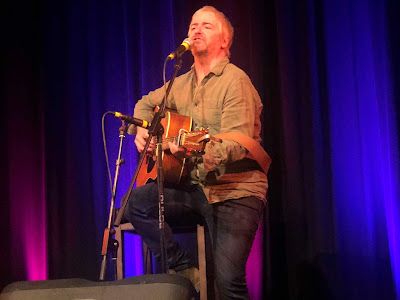 John Bramwell brought his never-ending tour to Darwen's Library Theatre on Thursday night for a set mixing classics from his I Am Kloot days with tracks from his debut solo album Leave Alone The Empty Spaces and as-yet-unreleased material from his Full Harmonic Convergence project. Support came from Dave Fidler.

Dave Fidler will be well-known to anyone attending John Bramwell shows over the past six years, performing in John's band as well as opening many of the shows with his own solo material, which now stretches to two albums - I'm Not Here and last year's Songs From Aurora as well as a stash of unreleased material. Like John he has an innate ability to capture simple human emotions and express them so succinctly and evocatively in a way many could only dream of. Whilst John's oeuvre is darker, Dave's is predominantly a happier one, evidenced in Easy Gone Easy Come, a song written for his son Dylan three days after his birth in the style of Bob Dylan. Dave tells us Dylan's now eleven and beatboxed the song with him at a recent gig. 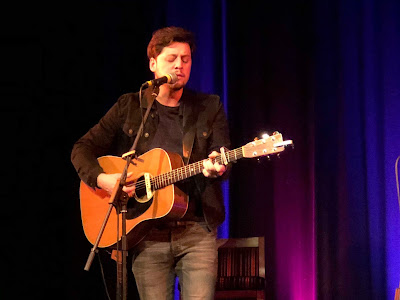 He plays a couple of new songs - Monday Blues and All The While - that have an instantly classic and memorable feel to them. Dave's guitar playing, in evidence later in John's set as well, stands out and complements his rich vocal delivery, whilst his final song, and lead single from Songs From Aurora, Skylark is a little lighter of touch but no less rich and redolent in style. The Darwen crowd listen impeccably and respond generously at the end of each song, knowledgeable and attentive and a refreshing change in these days of incessant chatter at quiet shows.

John's on good form tonight, many of his old jokes are out on display, but it's the manner which he tells them that means that no one ever tires of them - and he tells us he drives home after the gig laughing at them as he thinks he's funnier than anyone else does. And there's some truly unique magical moments, like during Northern Skies where the audience are reticent to join in a section where crowds usually do and John looks across to Dave and half-whispers "most places help us out" and the song's thread is lost in laughter before everyone recovers in a singalong of the "na na na na" section or when he's moved the mic placed close to his guitar away so he doesn't knock it, but it's facing the crowd and tells the sound man he's done it "to amplify the applause". They're moments to cherish even among the magical timeless music that John creates, covering two decades of his songwriting over the course of an hour and a half.

It's the songs though that have this audience silent, other than for the rapturous applause at the end of each song, the heavy breath and faint sound of a favourite line being sung ever so quietly so it doesn't disturb those around them. Songs like Bigger Wheels, Mouth On Me, To The Brink and I Still Do, the latter John tells us was his Dad's favourite Kloot song, have a heightened sense of poignancy with just the acoustic guitar, voice and a silent room for company. It's a quality that pervades the new material as well - Sky Full Of Thunder And Lightning, which John tells us he recorded with The Full Harmonic Convergence over the weekend with a wry smile of satisfaction, starts with an acapella first verse that's as battered and bruised romantic and wistful as anything he's ever written before, whilst Time's Arrow, from Leave Alone The Empty Spaces, pulls equally strongly at the heartstrings and tear ducts. 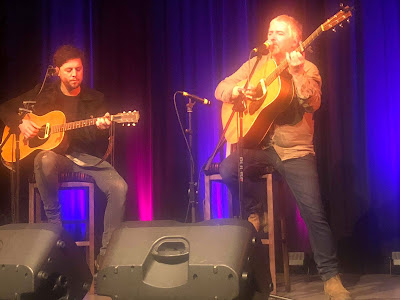 Dave joins him for a four song section of new material - featuring Who Is Anybody Anyway?, Leave Alone The Empty Spaces, Days Go By and Leave No Traces - the friendship, mutual respect and musical chemistry between the two very self-evident throughout on songs that are at least the equal of the more-loved material that surrounds them on the setlist. Whether it be the dual vocals coming together at the end of Who Is Anybody?, the short sharp shock of Days Go By and its killer line "you hesitate, you meditate, you turn your mind off and levitate" which John tells us he wrote with a bottle of wine while watching La Vie En Rose on his sofa before taking a well-deserved nap, or the more widescreen Leave No Traces, the songs have an immediacy to them and a warmth that the audience respond to.

The evening finishes with the old favourites and perennial singalongs of Northern Skies and Proof, although John does warn that it might not be the customary gig closer once The Full Harmonic Convergence album comes out, which he tells us will be "next year." It promises on the evidence of tonight to be quite some record and a welcome addition to an exemplary body of work that John has taken us on a journey through.

John Bramwell played Bigger Wheels, Mouth On Me, No Fear Of Falling, Sky Full Of Thunder And Lightning, To The Brink, 86 TVs, From Your Favourite Sky, Time's Arrow, I Still Do, Fingerprints, I Believe, Who Is Anybody?, Leave Alone The Empty Spaces, Days Go By, Leave No Traces, Meet Me At The Station, Northern Skies and Proof.