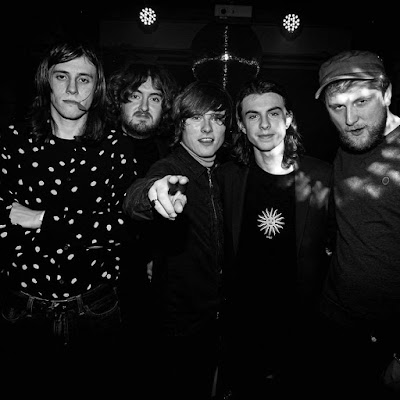 Dirty Laces release the video of their new single You ahead of an extensive nationwide UK tour. We caught up with them to find out a little more about them, their links with Bands FC, love of physical product and excitement about going on the road to new places.


First of all could you introduce Dirty Laces and tell us a little about how you got together?

Dirty Laces are Charlie Jordan on lead vocals, Luke Dec on guitars, Jacob Simpson on guitars and backing vocals, Tom Edwards on bass and Luke O’Reilly on drums and percussion.

Dirty Laces formed around the North Manchester / Oldham area in late 2017, we’d all been in bands together at different points with various other musicians that didn't quite work out, but when we got in a room together as Dirty Laces there was an electric energy and a spark that just seemed to work. We knew this was going to last and we’d make our mark one way or another.

You’ve already picked up support from the likes of Bands FC who designed you a badge based on Chadderton’s which also appears on your drum skin. How did that collaboration come about and how important was it to have the local link?

We volunteered to work and perform at some of the Tim Peaks Diner stages across the UK which was a great experience for the band when we were starting out, it was our first real shot at playing proper festival stages with some of our peers and other rising bands that we looked up to. It was there where we met Nick from Bands FC who we got close with and he offered to work on a Bands FC collaboration with us and our local football team Chadderton FC. It was really important for us to work with social media giants like Bands FC to help us promote our band on their socials and give us exposure to all their fans. Everyone seemed to love the badge and it was a great honour to pay homage to our local club. We ended up playing a fundraiser gig at Chadderton FC’s clubhouse and sponsoring their kit this year, it's crazy really how things work out. Grassroots bands and Football clubs have a lot in common and are often in the same boat so it’s good to work together.

Your new single You is coming out this week. Could you give us a little insight into what the song is about?

The song has many meanings and it’s intentionally written to be open to interpretation. It’s mainly about self discovery and the balance of power and finding our place in life, questioning who are idols are, who shapes the way we think and how society and the media changes our outlooks on things. ‘You’ is a very personal song and we’re kind of wearing our hearts on our sleeves with it. We think it mirrors the depth and passion that the band has to push our boundaries conceptually with the lyrics and instrumentally as musicians.

You’re releasing it on a physical format like most of your previous singles and EP. How important is it to you as a band to release physical product?

We feel very strongly about releasing music physically as well as digitally because physical stuff really lasts. Your fans can keep it for as long as they want and it will never leave them, it actually exists and you can get a feel of the artwork, it's a better reflection of the hard work that went into writing and recording the song. It’s the beauty of physical music that we love, a lot of our records at home have been on the planet longer than we have which is crazy and fascinating. We just kinda want to tap into that.

There’s no set writing formula in the band and this was the case with You. Tom wrote the lyrics out separately at home before we went for a writing session in Wales where we got the first demo and the bulk of it was written. It came out of an instrumental jam and was one of the first things we worked on that weekend, it started out with the riff between the bass and drums and we kind of all just collaborated and kept layering more guitar parts and melodies on top of eachother. To be honest the demo was very raw and improvised, we were just going with it expressing ourselves and it seemed to work. We seem to have gained a lot of telepathy with each other recently. We really understand each other and know how to complement each other's parts in the right places when crafing songs and playing live. It's a great skill to have.

You, and the other new song Exile that you played at your warmup shows at 33 Oldham St last weekend, very much feel like a progression in your songwriting. Are they representative of how you’re developing as a band?

Yeah I agree. I think we’ve really been developing in many areas and our songwriting has been a massive part of that. It’s just been a natural progression, the more you gel the more you understand your own strengths and weaknesses. I think the important thing is though we’re just writing music that we love to play and music that we’d listen to ourselves if we were going out to find a new band. We’re still growing and learning how to articulate ourselves to get our message across, it’s a tough road and you’re constantly exposed and being judged but we feel our point is really getting across now, what we’re actually about.

You’ve already had quite considerable local success, selling out Gorilla and releasing an also sold out live DVD of the show. Was that one of your aims when you came together as a band and did it surprise you how quickly it happened?

We definitely wanted to become a live spectacle when we formed the band and selling out venues like Gorilla is a huge part of that. We are relentlessly gigging and playing shows, we rarely have time off which is necessary in this industry at the stage we’re at because there’s so much competition and so many good bands out there, especially in Manchester. It is a bit mad that we’re selling out venues like Gorilla but we’ve really put the work in, you can’t fluke stuff like that. It is really humbling though, we never expected to do be doing the gigs and festivals we are we first got together, but we always believe in ourselves and know we’re capable.

You’re about to embark on a large nationwide tour. Are you excited to go out and play to people who won’t necessarily have seen you before?

Yeah it’s always good to get out of your comfort zone and face new challenges. It’s quite refreshing seeing new faces and meeting new people and getting to travel to new places. It really helps us bond and build our chemistry getting time away from Manchester. In terms of winning over new audiences, we believe in ourselves and we give our all at every gig so we’re not worried about it. We have a lot of passion and energy on stage, we’re evolving and improving all the time so it never gets boring and repetitive for the band or audience.

What are your plans after that - more singles or are you planning something bigger like an EP or an album?

We’ve always looking to take the next step of progression, whether that being an album, EP, or more singles. Expect new material, bigger and better shows. We’re very open minded and just want to keep the momentum going.

Could you describe Dirty Laces to someone who has never heard of you before?