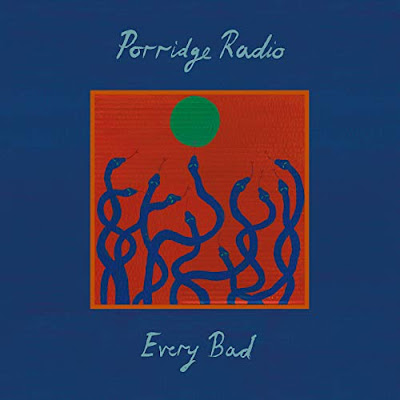 Every Bad is Porridge Radio's debut album proper, introduced by three singles Lilac, Sweet and Circling that give a surface level view of the soul- and mind-searching that goes on across its eleven songs- plunging the darkest of human emotions and head spaces as a form of catharsis by opening up in music. It's a rewarding listen if you're prepared to immerse yourself fully into it free of distraction.

"I'm bored to death, let's argue" is the repeated opening line to Every Bad's first track Born Confused, and in that line much of what happens over the course of the eleven songs is crammed into one line. Porridge Radio's label debut (they released a garden-shed recorded album Rice, Pasta And Other Fillers back in 2016) contains a series of contradictions with the tension heightened by repetition and a sense of unease at where the songs are going to take the band and listener. It holds you on edge for the next forty minutes as Dana searches through the jumbled thoughts that live inside her head. "Maybe I was born confused, so I don't know what's going on, maybe nothing's going on" juxtaposes into "thank you for leaving me, thank you for making me happy", the second line repeated and repeated like a mantra thirty-eight times, slowly getting more desperate as the music becomes sparse and then cutting off before the last "happy." It's unsettling, yet somehow intoxicating, holding you and drawing you in.

The album's lead single Sweet is full of dual personality - "you might like me when you meet me, you might even fall in love" is the other side to writing letters wishing that the person in question was dead, then taking it back or rambling about a pen that lights up. Musically Sweet jumps around, never standing still or settling into a groove, adding to the dangerous undercurrent of the song. Two songs in and you know Every Bad isn't going to be filed under easy listening - but, guilty pleasures apart, neither is the most important and exciting music.

Don't Ask Me Twice also feels like it's got a split personality, losing itself in a fit of swearing seconds after two voices, like chalk and cheese, declare repeatedly "I don't know" before suddenly turning into a glorious widescreen vision, a world apart from what's just happened. Long starts with a repetitive guitar riff that feels like something pecking at your head constantly, like a form of Chinese water torture creating a real tension as Dana declares that no one is telling her anything before taking aim at an unnamed target that "it's a waste of my time" before heading out on a rant that feels like a stream of consciousness purging all the bad thoughts in her head.

Nephews is more restrained musically, but this just adds to the tension given what's gone before - the first four songs having created a sense of unease as to what's going to meet you round the next corner, although by the end Dana is repeating "we love each other so" and it feels like calm might have been restored. That lasts a few seconds into the misleadingly-titled Pop Song where she asks "won't you take me home, I've nowhere to be, I'm lonely" as she descends into a spiral of caustic self-assessment and a declaration that "I'm never coming back" and questioning where home is and where she feels safe. The understated nature of the music simply heightens the tension, the memories of the album's opening still fresh in the mind. By the end, the vulnerability opens up and she's asking for help - "please make me feel safe" repeated as the final lines.

Give Take starts off like a terrifying nursery rhyme with the line "one, two, three, four, one, two, three, four, don't you know what I've been waiting for" repeated three times creating an uncertainty that runs throughout despite Dana declaring "I want you, I always get what's good for me" before turning everything on its head asking "how do I say no without sounding like a little bitch" and the song jumps between the two scenarios leaving the listener confused but drawn in and unable to free themselves as the intensity builds.

Lilac's opening is wrought with doubt plaguing the song, Dana trying to find a way to get out of being stuck ("I'm stuck" is a line that's repeated underneath the main vocal) and fighting her demons to try and make things better despite the thoughts in her head and her inability to find the right solutions. It ends with the optimistic thought "I don't want us to get bitter, I want us to get better, I want us to be kinder, to ourselves and each other" repeated as the music builds behind it, drowning out the words, causing Dana to turn up the volume and become more frantic in her declaration.


Circling starts off with an imposing sense of the walls closing in and grows more claustrophobic as it progresses despite the protestations that everything's fine which are contradicted by the source of the evidence provided - "I go inside the sea sometimes" - as if struggling to come to terms with and explain everything that's going on inside and outside. It segues into (Something) where Dana tells the song's subject "Don't rely on me, please rely on me, I rely on you and nothing makes me feel this way except for you" set to drums that create a sense of unease and approaching doom.

The album concludes with Homecoming Song, a reflection that "I'm a sinking ship" before repeating "there's nothing inside" for most of the song, a sense of being bereft of knowing what to do hanging over the end of the record, but "I'm coming home", the album's final line before it stops abruptly in its track, feeling like the only way out.

Every Bad is a record that demands your full attention, that you dive in and let it envelop you in the sea of human uncertainty, doubt and fear that forms the current that will carry you along through it, pushing you under and then lifting you back up for air. It's frazzled in points but with moments of clarity and lucidity that give hope that music and its ability to communicate and connect with like-minded individuals might just be the saviour of the day.