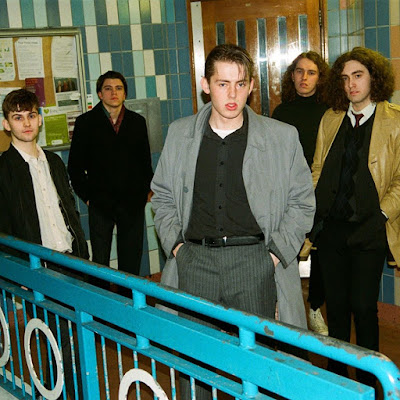 Document were due to play their biggest headline show last week to celebrate the launch of their five-track EP A Camera Wanders All Night. We caught up with them for a chat about how they came together as band, the creation of the EP and how they are developing as a band and plans for the rest of the year.

Could you introduce Document and tell us a little about how you came to be a band?

Document is a small village near Manchester. We were founded by English settlers in the 1700s and now boast the largest theme park in the world with one of the tallest roller coasters, the “American Heat”.

The name is a striking one in that it stands out because of its simplicity. It doesn't give much away about the band and wasn't created with coming top of any internet search in mind. What was the thinking behind the name and was it chosen to be deliberately non-descriptive?

Naming the band was a tall order, especially when we had five opinions to consider. We had no preconceived idea to make the name ‘non-descriptive’, it was simply just a name that we all liked and thought suited our sound. The name was actually taken from an REM LP when Chaz was looking through his records.

Your debut EP A Camera Wanders All Night came out last week - a lot of bands focus on singles, how important was it to you to have a collection of songs out in the world rather than a bunch of tracks recorded at different times that might not necessarily reflect where you are as a band?

These five tracks were some of the earliest work by us as a band. It felt right to release them all as a collection of songs, as they reflect the sort of birth of Document. Moving forward, we feel we are creating a more established sound, so to release these songs as a complete EP was a way of boxing off this era of our band.

Where does the EP's title come from?

For a long time the EP was going to be untitled. We weren’t too fussed on having a name, but said that if one was to come to us we would give it consideration. When Sam Kennedy returned the EP artwork to us, he included the phase ‘A Camera Wanders All Night’. I think we were all sitting together in a meeting and one of us chimed up about how well it suited the EP’s observational approach to lyricism, and it just made so much sense. As much as we would like to take credit for the whole thing, we’ve got to thank Sam for that one.

Your sound is very distinctive when you listen to your contemporaries. How important is it to the band to stand out from the crowd or are you just doing your own thing and that's the end result of the five of you being in the same room?

We think our sound is a reflection of the fact we all play with different influences at heart. We all share a love for the same music, but as we all grew up listening to different things, we think it shows when it comes to writing; pairing drum beats with guitar sounds that maybe shouldn’t work, that sort of thing.

What inspires you to write as a band - do you set out with an idea for a song and work on it or do they come naturally through jamming in the studio?

The first couple of months or so of being a band we spent most of our time fleshing out demos written by primarily Chaz and Al, however nowadays it’s a lot more of a collaborative process. We all love writing, which is a nice place to be in, as it means we don’t really have a set algorithm for writing tunes. If someone has an idea we will jam it, sometimes it becomes a tune, sometimes we scrap it pretty fast; a pretty well oiled machine to be honest! It’s a great feeling when a song comes together that way, everyone just sort of looks at each other and goes, ‘yeah sick, that’ll do’. We make an effort to allocate time in every practice solely to jamming and trying out new ideas. Most of the tracks start out as instrumentals, and then we leave Al to go away and write the lyrics. The lyrics are the only part that isn’t really collaborative.

Listening to the EP there feels like an incredible attention to detail in the lyrics, that they're telling a story or conveying a message that you want someone to hear. Alex, do lyrics come fully-formed or are they an iterative process?

There’s definitely a form of iteration in the way my lyrics are created. Once an idea is drafted I’ll stick with it until I take it into the studio, there I redraft a few times until I get the outcome I’m happy with. I write from a rather nihilistic, cynical point of view which allows me to compile everything I hate and gather it into a story - which gives me a way to release energy. This is perhaps why there appears to be such an attention to detail, as I take pride in my lyricism and want the listener to feel the words ring true in their world. This is why I write observationally to try and interpret the misunderstood, using Manchester's glum streets and almost overly-friendly faces to derive some form of comprehension for content.

A Camera Wanders All Night is centred around the themes of paranoia and isolation and has them concocted into this monotonous charm. The writing of the EP allowed me to reconcile with a darker side of myself, being able to contemplate our existence in, and speak freely about, our current tumultuous world. I think it can let a listener who is struggling with these thoughts be more at one with their feelings.

Assuming things get back to some sort of normality soon, what do you have planned for the rest of 2020 - have you more songs ready to go or will you be going back into the studio?

We’d love to get back into the studio. We’ve got a few ideas that we think we could make sound super cool on record, COVID-19 depending. Other than that just gigging presumably. The thought of not being able to play live for such a long period of time kills us, but we imagine we’ll be using the time to ensure the headline gig in November will be something special. If all blows over relatively soon we’d love to get to a few more cities in the UK, if they’d have us.

Your biggest headline show to date was scheduled to take place at Gullivers last Friday, but has been postponed and upgraded to Soup Kitchen in November. Do you see the step up in venue for the rearranged date as a statement of intent?

I think more than anything we’ve seen it as the way to make the best of a bad situation, but I do get what you mean. We’re all glad we were able to make it work at a larger venue as we were already hitting the ticket cap at Gullivers, bigger shows just mean more of an audience to connect with. As a band who thrive on that kind of interaction to fuel us during shows I think the end result will just be a more powerful and memorable performance.

How would you describe Document to someone who'd never heard of you before?

Our review of A Camera Wanders All Night can be found here.

Lead photo by Bands On Film (from Document's Facebook page)

Email ThisBlogThis!Share to TwitterShare to FacebookShare to Pinterest
Labels: Document