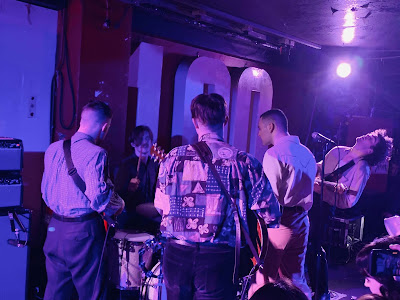 The Murder Capital signed off their UK and European tour in style before heading to conquer America with an intimate headline show at London's 100 Club on Wednesday night as part of Annie Mac's AMP Festival. Completing the line-up were Working Men's Club and fellow Dubliners Odd Morris. 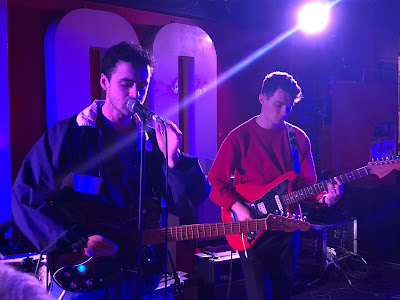 Odd Morris have thrilled us with their three singles to date - What Might Be, Lilac Leaves and Cold Water - and that had them at the very top of the list of must-see bands for this year. They didn't disappoint at all, their six song set contains the latter two but also four more songs that show that they're in a perfect position to back up the potential of those singles. Sam's tight rhythmic drumming gives the rest of the band the space to open up the songs and allow Daragh's vocal to come through the centre. They shy away from employing raw power, preferring to wrap themselves around the audience who fall for them big time. 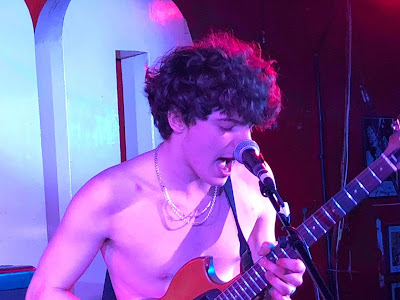 Working Men's Club are barely recognisable from twelve months ago other than the presence of front man Syd, who starts the show in a tracksuit top and three songs in, on the punch-drunk John Cooper Clarke, he's out in the crowd, agitating, challenging the audience to join in their intoxicating yet often brutalist mix of live guitars and electronic wizardry. That transformation even extends to their breakthrough single Bad Blood that's ditched its indie band t-shirts and discovered acid, whilst set-closer and second single Teeth is all razor-sharp obtuse angles fused together into a thrilling finale where Syd's hyperactive moves are countered perfectly by Mairead's ice-cool presence. It's those types of contradictions that make Working Men's Club such an exciting prospect ahead of their debut album release.

The Murder Capital look tired. It's not surprise given their gruelling schedule that saw them on stage in Dublin last night, on the redeye flight this morning to do a Radio 1 session before this show. But the moment they step out on stage, there's no question of them holding back, the intensity of their songs and their approach to performing such that they leave nothing on the stage at the end of the set except for a mass of exhausted audience bodies who've climbed or crawled up there as a riotous Feeling Fades finishes with James surfing across heads towards the back of the iconic venue and then back to the stage. 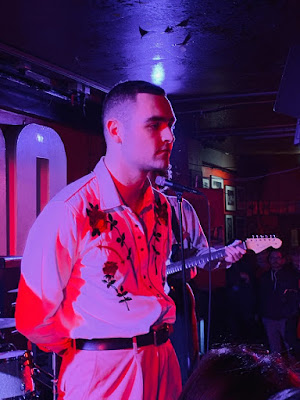 The nature of the event means that there's a mix of the hardcore fans who snapped up tickets in seconds and the "look at me" industry types who frequent the bar area and don't shut up when the mournful bass line of On Twisted Ground strikes up, causing James to sing the whole song staring daggers in that direction whilst the rest of us close our eyes and lose ourselves.

Whether it's the headrush breakneck speed of the likes of Don't Cling To Life, More Is Less or Feeling Fades, the stretched out Green And Blue and Slow Dance that shows the band's musicianship and intuitive brotherly connection between them, losing yourself is something you need to do at a Murder Capital show. Don't hold back, because those around you won't be and those on stage certainly won't, sleep-deprived or not. You sense that when one of them starts to flag the others will lift them out of it in a moment as they've got each other's backs and they function as a unit. As they congregate around Diarmuid's drum kit as Slow Dance enters its second phase, it's the sort of moment that would go down as contrived fake faux-folk nonsense if the likes of Mumford And Sons did it, but here it's them appreciating what the other four do for them.

This might be the last time we'll see them in such intimate surroundings in the UK for quite some time as they go to seek their fame and fortune in America, consider the gargantuan task of somehow following up When I Have Fears and inevitably make a further step up in venue size when they return in the autumn after winning over even more admirers in the festival season.

Working Men's Club are on Facebook and Twitter. They play Paris Inrocks Festival (March 5), Liverpool Sound City (May 1) and Live At Leeds (2).

Odd Morris's website can be found here and they are on Facebook and Twitter. They play London Brixton Windmill (March 5), Dublin The Workman's Club (13), Dublin Vicar Street (May 12, with Shame) and Manchester Gullivers (19).