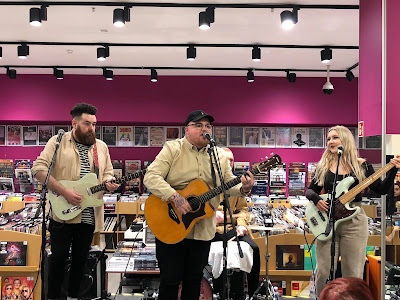 The Lottery Winners celebrated the launch of their self-titled debut album with a short in-store set at Manchester's HMV followed by a signing session.

Midway through the set Thom turns to Katie and tells us all that she burst into tears earlier in the day when she walked into HMV and saw their album on the shelves. It's a touching moment, but one that underlines just how big a deal it is for the four to finally have their debut album out against pretty much all the odds. And as we waited for them to arrive on stage and the songs blasted out of the HMV speakers, it didn't sound out of place one bit.

Thom comments that they've always wanted to do an HMV instore yet not quite so empty, but he's being harsh on the turnout as there's a respectable number in for one of these events, having been to a few, and ten miles down the road in Tyldesley there's a room full of people waiting for their homecoming celebration who would ordinarily have hopped on the V1 down the East Lancs. That self-deprecation sometimes does them a disservice, but it shows they've still got their feet on the ground. And they demonstrate that by taking requests after their first song Elizabeth.

Their set-up is stripped down, as Thom does the introductions later he tells us drummer Joe is the man "on the small kit behind the large man", but this format doesn't diminish the fact that the decade The Lottery Winners have been together has seen them develop a set of beautifully crafted uplifting songs that it's impossible not to find yourself tapping your feet away to and mouthing the words. That list of songs is so long that the first request they take is for Long Way Home, which didn't make the cut onto The Lottery Winners, but like several other songs could have fitted perfectly on there.

Little Things shows the interaction between Thom and Katie's vocals that gives The Lottery Winners' songs a lift and the harmonies make them stand out. The crowd, everyone seeming to know every word, mouth along. They're given the opportunity to test their lungs though on the final song 21 and Thom gets us to practice, chastising one woman playfully who doesn't sing along by calling her out "for not having fun." The crowd then take over chorus duties, aided by Rob and directed by Thom. At the end, the song stops, Thom tells us he usually leaves the stage at this point so doesn't know what to do, then it starts back up for one final outro. And that's another thing off their tick list of things they wanted the band to do completed.