TRACK OF THE DAY : Asthmatic Harp - Bird Of Paradise 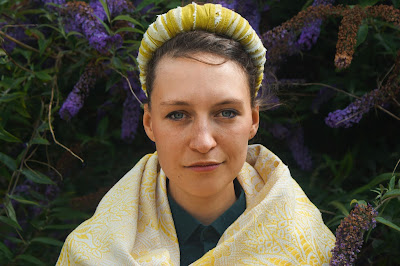 Bird Of Paradise is the first track to be taken from Asthmatic Harp's forthcoming EP Things We Learned To Live With that's due out in the summer. It's accompanied by a live performance video that strips away the autoharp of the original recording into a more traditional acoustic track that still retains the fragile, delicate intricate beauty of the original.

Asthmatic Harp is the project of Danish-born but Glasgow-based musician Hannah Fredsgaard-Jones, who's been making music since 2015's debut EP Lost Astronaut, which was followed by 2017's trilogy of songs named after London Underground stations. Bird Of Paradise is the first track to be taken from a new EP which has been assisted by Help Musicians UK's "Do It Differently" award. Keen to give something back, Hannah has established the Blue Tongue Collective, a group of Glasgow-based musicians to thrive off each other's creativity and support.

Bird Of Paradise features a whole range of instruments, from the autoharp and clarinet to more traditional synths and acoustic guitar, but all of this gives Hannah's evocative voice space to take centre stage, the subtle intonation of her voice capturing the emotion of the lyrics where she asks "what is this thing called spring?" as a metaphor for the start of a romance and the questions that come with it in the second half of the song.