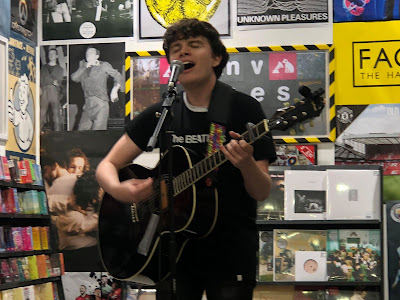 Tameside's Cobain Jones is one of a new breed of songwriters from the Greater Manchester area who's not tied to the legacy of a certain set of brothers and takes his influences from wider afield. He played Manchester HMV's first ever Live N Local showcase on Tuesday night with a set of four originals and five covers.

Cobain's already made something of a stir with low-key shows signalling him out as a songwriter of note and across the five songs on his homemade The Ravenhead Demos EP that HMV are selling, this very much comes across. He doesn't sing about cigarettes or alcohol, but about observations on life, his own and those around him, and he does it with a polite nod to his influences, but with a personality and character of his own and a voice that's immediately warm and endearing.

He's unperturbed by the half-hour delay in the set due to technical issues or the fact that there's not a huge crowd here. These are learning experiences rather than life-changing sold-out gigs, those will come later. He has the humour to plug his own CD on the shelf by the speaker between songs which just adds to the compulsion to warm to him.  Sinkin', She Plays, Listen and Hold Me Back are brimming with promise, great songs in their own right, but you know there's much more to come from him as he finds his feet and navigates his path.

His covers are telling - three Beatles songs - I've Just Seen A Face, Norwegian Wood and She Said She Said not being the obvious songs of choice that young acts brave enough to tackle such an iconic band would go for - and then The Charlatans' North Country Boy and Seahorses' Blinded By The Sun being surprising choices, unless you know him. They're difficult to deliver with just an acoustic, but it's testament to his musicianship that he does respectfully yet not blindly following the originals. We're certain though in six month's time he won't have the need for them.