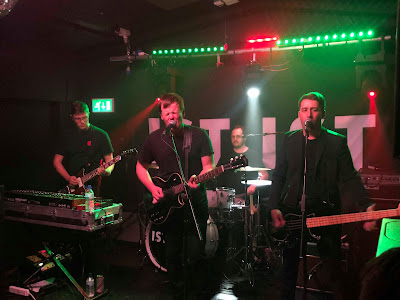 Ist Ist opened their UK tour in London at the newly revamped Grace with a powerful set mixing tracks from their first two EPs, early singles and two tracks from their forthcoming debut album to a delirious crowd that fully bought into them.

There's an expectant atmosphere by the time Ist Ist make it to the stage at 9.30, a mix of those who'd experienced the band on their previous shows in London and came back for more, their friends who'd come along to see what the fuss was about and a few curious newcomers. By the end of the night, they're all pretty much indistinguishable as the band show just how far they've progressed and are still progressing - more powerful than ever before, a controlled aggression right on the brink of explosion creating a potency in the songs and a sense of unease and tension that grips you like the very best live music always should.

They open with You're Mine, an unreleased song that should appear on their debut album.  While the older songs have developed into what they are today, it feels like this and the other new one Black have come fully formed, muscled up for confrontation and ready to embed themselves in your conscience on first listen.

Jennifer's Lips, like Son Is The Father later in the set, sees Adam lose himself in the inner thoughts that lie right at the centre of these songs, creating a real pregnant tension in the room as the songs build around him. There's a lot of personal stuff in some of these songs, like much of the very best music of the genres that Ist Ist get labelled with, but the music feels like a release and as a mosh pit forms of people who meet for the first time and finish the show like old friends, it feels like something magical is taking place.

Silence and Night's Arm go way way back now to the days when they simply relied on the belligerent energy of the songs as a three-piece, but with Mat on board and the songs being subtly reworked, they still more than stand the test of time despite the band now having a brand new set of songs that could feasibly condemn them to the limited edition cd-rs on which they were released what seems like a lifetime ago in band terms.

I Want To Disappear, Preacher's Warning and Undignified shows that they can dial it back, afford themselves some space for experimentation and yet still not lose the cutting edge and insistent demand on your attention of the louder moments. It's all about control and precision and yet somehow making this feel like anything but clinical - a fine tightrope to walk but one that Ist Ist seem to manage blindfolded.

I'm Not Here, Exist and the spiralling adieu of Diversion ratchet things back up, send the front rows into one last frenzy, lost in the music. The response they get at the end is as loud as if the room were full and that feels like a defining moment. Tonight they sounded the best we've ever heard them - and some of the credit for that must go to the in-house sound engineer who gets everything spot on - they've got that intuitive relationship between the four of them of a band that is riding an upward trajectory, simple things like the backing vocals lifting the song, and a consequence the crowd, at just the right moment, and a confidence running through everything they do, an assuredness that they know just how good they are and that an attentive audience will connect, which they do.

Word of mouth can be a powerful tool. For many bands it's their main weapon. Ist Ist have got to the point where they can pull a hundred or so people to London with no label support, little promotion other than their own, just excited chatter, personal recommendations and chance encounters with them. The fact that these numbers are growing organically tells its own story as to how they are connecting with people far and wide. And once you've been in the room with them on a night like this, you'll keep coming back for more.