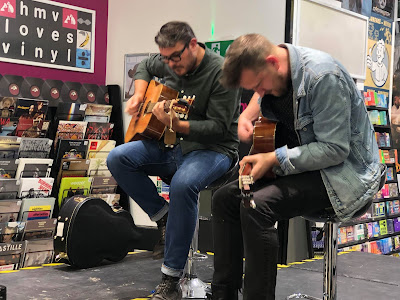 It's a small crowd that's gathered for the instore and signing, but there's a camaraderie between audience and band before they've even started, many on first name terms and it's testament to the warmth of the band and the fact they clearly don't think that this type of event is beneath them as some do.

They tell us stories behind the songs - whether it be the new ones Jekyll, Good Night Out or Listen Little Man! or the older ones Decent Days And Nights from their self-titled debut (now fifteen years old) and Hard To Bear from 2008's This Is Not The World. They laugh and joke about aggressive guitar strings and Ross waiting for the drum fill on Decent Days And Nights, whilst Barry swings round on his chair while Ross takes the lead on Good Night Out. They call Liam Gallagher, on a poster bearing over them "the man, the myth, the legend" and chide us for being heartless for not responding to the tale of a friend's lost love of Hard To Bear, before Barry says he wrote a song about it to make money so it wasn't all bad.

They get us to sing along too, teaching us parts of Listen Little Man! and cheering a guy who's a little too enthusiastic singing along. They split us in two for Hounds Of Love to share the backing vocals whilst we're taught the chorus of Old Dun Cow and end up clapping and singing along by the time the old tale reaches its fourth and final chorus.

Whilst it's far removed from a typical show, it's a very different type of experience and one that makes you immediately warm to them. The new songs aren't, even in this stripped down form, just resting on laurels and the back catalogue, but trying to do something different and fresh. It might have been seven years since the last album but it still feels like they want to move forward.

Email ThisBlogThis!Share to TwitterShare to FacebookShare to Pinterest
Labels: The Futureheads