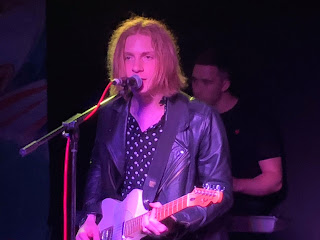 Rory Wynne played the second of his four night residency at Zombie Shack on Friday night, an hour plus set covering seventeen songs from his debut album, EP, early singles and some new material. Despite having to fight against crippling sound issues the quality of the songs managed to shine through.

We're baffled as to why Rory Wynne hasn't become bigger than he is. He possesses the songs, the coolness and arrogance that you need to be a rock star and he's certainly had opportunities like opening up for Blossoms that could have catapulted him into bigger venues around the city. So while No Hot Ashes, who started around the same time, deservedly fill up The Ritz round the corner, we make our way up the spiral stairs to Zombie Shack, perched below the train tracks by Oxford Road station to catch one of the city's most underappreciated talents do battle against the odds.

That the songs can survive such appalling sound is testament to Rory's songwriting craft. His debut album contains eight gems that would be lauded by thousands if they'd been written and released by his contemporaries. Friends, Little Miss Edgy, Picture This and What You Say To Me are three minute songs that would brighten any radio station playlist and should be setting crowds off bouncing, but tonight Rory's coming out on to the floor amongst us to connect with us and possibly to try and find better sound so he can hear what his band are playing. Despite that they still manage to shine through against the odds.

Recent singles The Next Day. D'You Wanna Do It Again and Getting Over You show that his streak of writing this sort of song is showing no sign of abating and there's a new song - Need You Tonight - that we'd place our money on being a single in the not too distant future.

He goes further back as well - rediscovering his 2015 single Why Don't You - which shows just how long he's been around this game - and the four tracks from his debut EP What Would Rory Wynne Do?.  The highlight of that EP is the set opener Star In The Sky is practically mutated by the sound, from speakers, mounted behind what looks like a bamboo cage that frames the stage. The sound engineer does manage to improve things as the night goes on, but it's like putting thumb plasters on a gaping wound at times, especially when Alex lets loose on his guitar and it looks great but we can't hear it.

He's on good form despite the sound issues, joking about the abuse he got on twitter for playing a couple of songs on the tram that morning for BBC Music Day and at the end telling us "I wish you could have heard it" but he maintains a professionalism despite the problems and seeks to give us the best show he can and the response he gets from those of us there showed that the crowd understood. It ended as a night that was just about a triumph despite the cards stacked so heavily against him.

Rory played Star In The Sky, Enigma, In The Dark, Friends, Can You Hear Me Now?, Getting Over You, After Me, Tell Me Now, Need You Tonight, D'You Wanna Do It Again, Picture This, Little Miss Edgy, Let's Have A Party, Why Don't You, The Next Day, Think What You Like, What You Say To Me and Outro.

The residency at Zombie Shack takes place on October 4 (with Valve and Poole) and 18 (with The Maitlands and Good Future).