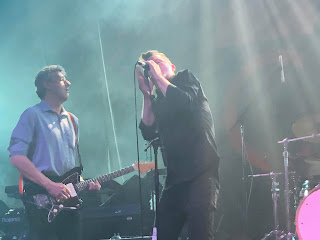 Of all the much-hyped Britpop reunions, Geneva's has been one of the quietest. Bedeviled by record label problems and hindered by lazy labeling, they never got the recognition their two albums deserved. Starshaped Festival has brought them back together for this year's tour of events and we caught them on the opening night at the Ritz in Manchester.

It's a less than half-full Ritz by 5pm when Geneva make their way to the stage, but they get a warm reception from an audience that probably thought they would never see this day.  When Nude Records went through a calamitous demise just as Geneva's second album Weather Underground was coming out, it proved to be the death knell for the band who went out with something akin to a whimper than a bang. It was a travesty for a band that had unfairly been lumped in with Britpop by record label association.

Tonight's set really underlines the error in that lazy categorisation. Whilst Geneva's USP was always Andrew Montgomery's stunning voice, and despite his modest protestations about high notes, they had a broad range of songs, from singles Into The Blue, No One Speaks and Tranquiliser to more epic sounding second album tracks like Have You Seen The Horizon Lately, Museum Mile and Amnesia Valley that the four-piece recreate perfectly here and you scratch your head and wonder why they weren't playing rooms this size in their own right at the time. 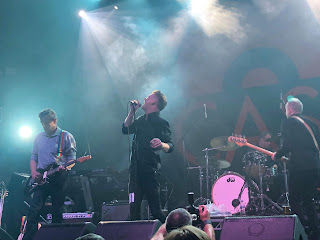 Musical reunions can be judged on what the band do with them. Some come along, play the hits, take the cash and leave people recollecting the hazy days of their youth. Geneva are approaching this thing differently. They start with a b-side Feel the Joy and there's two unreleased songs - Promised Land and Don't Make Waves, both featured on expanded versions of their albums available on vinyl at the merch desk - that show that they're not just here to take the money and run. Andrew jokes "just play the hit" at one point, but they strike the balance just right between satisfying the needs of those who still remember them fondly for their chart breakers and those to whom they meant a lot more.

Given their geographical distance (Andrew now lives in Sweden), they're remarkably tight as a four-piece unit (Stuart lives in California now so they are one light in numbers) despite a couple of false starts. There's plenty of references to that - Andrew joking that he only popped out for a pint of milk and four songs in declaring he needs a nap. But once the songs strike up, Steven, Dougie and Keith provide the perfect platform for that soaring voice to take over and it's the likes of  Killing Stars and those other second albums mentioned before that show them to be a band unafraid to push the boundaries of their sound and why their demise was lamented so much by those that cared about them because of that approach to their music. It's something they've retained over the past twenty years and the hints that their might be more to come are very promising indeed.

They finish with the duo of Transquilizer, its refrain of "let us be happy while we're still young" slightly tongue-in-cheek given we're celebrating a historic musical movement, but which prompts the growing crowd to sing along and Have You Seen The Horizon Lately?, Weather Underground's final adieu, and as it soars to its epiphany, we hope that Geneva don't leave it quite so long next time round.

Our interview with Andrew about the reunion can be found here.