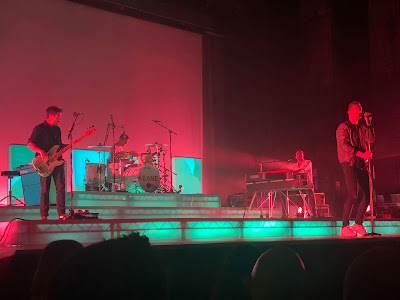 Keane returned last week after a seven-year absence with a new album Cause And Effect and their first UK tour in that time called in at an immediately sold-out Manchester Apollo for a night of reminiscing about their glory days but with the new album heavily represented in a mammoth twenty-four song set.

It's easy to dismiss Keane, to take the piss out of them. The posh kids from East Sussex, Tom Chaplin's well-publicised troubles after the release of Hopes And Fears that was labelled as a "port addiction" and the lack of guitars made them an easy target for the build them up knock them down brigade that championed them on Fierce Panda and turned on them when they started to top the charts. They weren't cool, like Pete Doherty whose similar issues were celebrated as making him somehow more genuine, but they gained a huge adoring audience that was actually quite terrifyingly intense in their fandom.

They went on to fill arenas, have four consecutive number one albums and continue to divide opinion between those who thought the music, and Tom's exquisite voice, were the most important things and those that simply thought the rich kids couldn't be taken seriously and that being successful was somehow a crime.

It's to their credit that they've come back with a new album straight away rather than treading the well-trodden path of spending two years living off the back of people's memories with greatest hits tours that most bands do when they return. They're also changing the setlist around each night too, to keep things fresh for them and their audience.

They start with two songs from Cause And Effect, beginning with the album's opener You're Not Home, a dark song about the breakdown and collapse of Tim's marriage, a theme that runs through many of the new songs and which Tom references later in the set. It means that the new Keane has a different sound and more importantly mood, but they manage to carry off interspersing new and old through a carefully put together set list that has something for everyone.

Two songs in and Tom tells us how delighted they are to be in the centre of British music, one of many references to the city, and that they need to up their game here. He's still a little awkward between songs in his chat, but no one cares about that the minute he starts to sing. When the new songs kick in, there's none of the chatter that pollutes bands' sets when they play the new stuff, people stand and listen. He asks that we sing, clap and have a good time, such politeness that many might dismiss as being soft, but actually is what music should be about - a connection, whether it be happy and effervescent or dark, dour and making you feel like you're not alone.

Bend And Break has downstairs, and most of upstairs, on their feet making a mockery of the stalls being seated for the show, but it does little to distill the feeling of celebration of their past and their current. Tom jokes that they're vying with one of the city's favourite sons Liam Gallagher for the number one spot, and probably with the midweeks in mind, conceding that they'll let him win, adding good-naturedly "he needs it." He later tells us that they're the second best Keane to play in Manchester and moves swiftly on before that debate gets too heated. 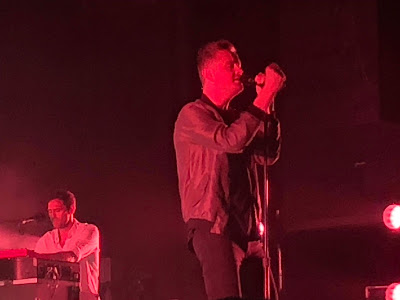 They pace the set perfectly, mixing the likes of Strange Room, a bleak song written as things were falling apart for Tim, is raw and vulnerable even in this huge room, and Sea Fog, with just Tim on keys, is achingly beautiful and rich in melody in amongst big singles like Is It Any Wonder? and Everybody's Changing. The former's vitriolic attack at the disappointment with new Labour as their mask started to slip somehow got missed at the time as Keane couldn't seen as political, but in these very extraordinary times, it feels even more relevant and it has a musical edge to it that many turned a blind eye to rather than acknowledge.

There's plenty of audience interaction, Tom befriends a lady in the front row and commends a guy dancing on the balcony for his moves and when he reminisces about their first Manchester show in 2002 at the Night And Day, he's shown a picture of the show on a woman's phone at the front and laughs at the "beautiful long-haired woman" who used to sing with the band. He jokes about Put The Radio On being their first song about shagging and constantly urges us to join in singing and clapping along, which most people need no invitation to.

The visuals for the first half of the show are very restrained, but as the set progresses they move up a notch with Spiralling and Perfect Symmetry having lyric videos on the big screen at the back of the stage, A Bad Dream depicting a war-time ballroom dance with gas marks and the Cause And Effect songs using album imagery quite powerfully to boost the songs. When Tim, Jesse and Richard join in with backing vocals on the faster songs, they're given a huge lift too, one that you feel takes the audience with them.

Most of the big hitters are saved for the end of the set. This Is The Last Time, Bedshaped, the comeback single The Way I Feel and their breakthrough single Somewhere Only We Know, which should melt the hearts of even their biggest detractors, feel like a communal celebration, a release and escape from all the nonsense and the final two Crystal Ball and the euphoric memories of growing up Sovereign Light Cafe leave people streaming out on a high.

No one, the band probably more than anyone, thinks that this comeback will change people's opinions on Keane, which are generally black or white with little in the middle. None of the three thousand or so people that packed the Apollo will care about that because there was so much love in the room that flowed from audience to the band and then back at us. It might not be cool to like Keane, but when did cool ever beat having a good time?

Keane played You're Not Home, Chase The Night Away, Bend And Break, Silenced By The Night, Put The Radio On, You Are Young, Everybody's Changing, Is It Any Wonder?, Strange Room, Stupid Things, Spiralling, Perfect Symmetry, Sea Fog, Disconnected, A Bad Dream, Nothing In My Way, Love Too Much, This Is The Last Time, Bedshaped, The Way I Feel, Somewhere Only We Know, I Need Your Love, Crystal Ball and Sovereign Light Cafe.

Email ThisBlogThis!Share to TwitterShare to FacebookShare to Pinterest
Labels: Keane