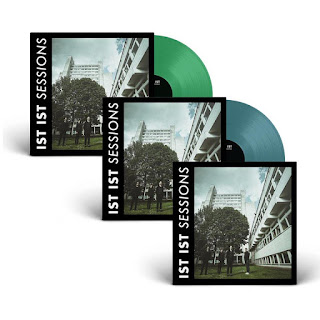 With their debut EP release Spinning Rooms sold out on vinyl and its follow-up Everything Is Different Now close behind, Ist Ist have taken the novel approach of re-recording them in one day in the studio and combining them on this Sessions release rather than simply repress them. We had a chat with bassist Andy Keating who walked us through the tracks on Sessions.

One of the first songs we wrote when we began experimenting with synths as a three-piece. We first played a version of it live at St Philip’s Church in February 2017. It was much slower and in a completely different key.

When we began writing for ‘Spinning Rooms’ we wanted a song which had more electronic elements instead of four predominately guitar-based tracks, but Adam put the guitar line over it the week of going into the studio in January 2018 and it transformed the whole song.

The song we probably spent the most time writing. We couldn’t get the verse, pre-chorus and chorus sections to flow into one another and we were ready to bin the song on several occasions. The potential of each individual section kept us from doing that and eventually it clicked.

One of our favourite songs to play live, the crescendo with the two-note guitar ‘solo’ and the bouncy bassline is always fun.

Originally written as a completely electronic track with a throbbing synth line and arpeggiator. We fleshed it out into a heavy track before scaling it back a little bit ahead of recording ‘Spinning Rooms.’

Seems to have become a bit of a cult favourite despite never being released as a single and has been in almost every live set in its various guises since 2016.

Deliberately written as a final song for the EP. We liked the idea of a meandering song beginning at A and ending Z, but we wrote it as one piece instead of stitching together two ideas we already had.

We’ve closed every show since June 2017 with this song barring the recent shows at YES and Kendal Calling. The crowd know what’s coming when the bassline starts back up but it always gets a big reaction.

One of those tracks where you’re not sure how it came about. The first part which was written may possibly have been the guitar line in the bridge and we built around that.

We gave it a run out at some of the dates on the 2018 tour but Mat joining the band coupled with increasing the tempo really brought it to life. We always knew it had the makings of a solid song but adding the keyboards really lets the choruses and bridge build-up soar.

Son Is The Father

Surely the most determinable lyrics from any of our releases to date. One life ending, another beginning and the ultimate responsibility of becoming a father.

I brought the bassline to rehearsal and the song was finished within two sessions. The ‘Everything Is Different Now’ title comes from this track.

The first song we wrote from scratch as a four-piece.

We wrote it two weeks before going in the studio to record ‘Everything Is Different Now’ but was never designed to be the fifth song on the record. We started messing around as an alternative to playing the earmarked tracks over and over again to get ready to record them.

The whole song came together in a couple of hours and we liked it so much it couldn’t not be on the EP.

I Want To Disappear

Adam brought this song to rehearsal as an almost fully-formed composition; lyrics, piano, melody, strings, everything. I remember us listening to it on repeat in the van down to London for the first date of the ‘Spinning Room’ tour and we loved it.

We didn’t change too many elements in the studio because the song said what it needed to say, but adding the acoustic drums and the bass guitar low in the mix just propelled it along a little bit without doing anything too drastic.

We had elements of this song floating around but nothing cohesive. Mat coming in in May 2018 changed it massively. The lifts in the chorus were so much more dramatic.

We used to rush the chorus, so getting used to playing it all at a consistent tempo on the click track took some doing. It seemed to plod to much at first but we grew to like it. The keyboard melody in the bridge and outro was added at the last minute in the studio when we were listening to it back and messing around with the synths still plugged in.