Dantevilles - Welcome To The Theatre EP 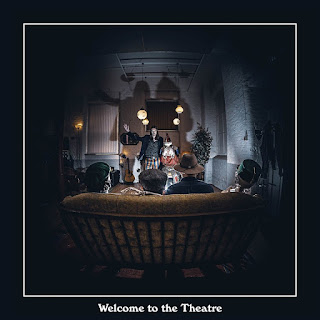 Dantevilles return with a new three-track EP Welcome To The Theatre, a set of songs that sees them branching out, expanding their horizons and making music that it feels like they're having a whale of a time creating.

"We wanted to express our personality through our music" Dantevilles tell us in the press release accompanying the EP and it's clear from the start of Soundscape that they intend to do just that. Less cluttered than previous releases, it allows all the instruments and vocals room to breathe. Imbibed with a sense of drama, driven by sudden changes of pace that make perfect sense in the context of the song, Connor's lead vocal ably accompanied by Jamie really let loose and explore the outer possibilities of what they can create. It's an impressive start that lives up to their own billing.

Save Me A Dance is more a groove-based tracks, loose and fluid with Jamie's lead vocals more suited to this side of Dantevilles' sound - "actions speak louder than words" he sings as he seeks to win the heart of an unidentified love target with the line "I don't think you know just how good you are."

Punchy drums usher in the EP's final track Confession, its lead single and their most adventurous track yet, taking the listener on a journey through a song of several sections that seem to fit together perfectly. Vocals interchange from Connor to Jamie and back again, sometimes almost falsetto, others quickfire to maximise impact, guitars take over first with funk and then later more traditional rock and roll undertones as the song builds to its conclusion. It's the best song they've released to date.

Where Dantevilles were once taught and tight and controlled in their sound, it feels like this EP is a turning point for them, as if they've decided to go with the heart and hands rather than the head in their sound without wholly abandoning the hooks and locked-in grooves that characterised their early singles. They're older, wiser now and a much better band for it.