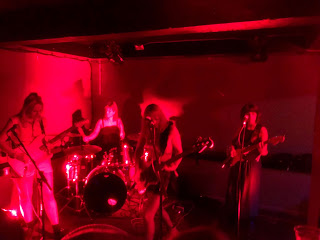 Loose Articles were one of the local bands invited onto the Manchester Psych Fest bill across four venues on Friday night. Down in the basement of the Ritz, they delivered a set that marks them out as one of the most in-your-face bands in the new wave of Manchester music.

Tre opens the set by repeating the safety announcement of an aircraft crew, asking us to secure loose articles from which they get their name. It's the only thing that's remotely gimmicky about Loose Articles though. They're unpolished, unsurprising given they've barely got a dozen shows to their name if that, but that's actually what makes them so brilliant. They don't have any songs released to date and they don't deign to tell us the names of any of the ones they play - but there's one about eggshells, another about the first pub Natalie was served in back in Halifax when she was fifteen, and a final call-to-arms demanding equality of the sexes, preceded by a reminder that much needs to be done to stop the condescending attitudes of some in the music business to women in bands.

Natalie and Tre share lead vocals, two contrasting styles that work well either with one taking the lead or them coming together at parts in songs. There's a rawness and energy to them that comes with a band learning their trade in front of an audience, songs held together by the drums which form the base through which spindly or sharp guitar riffs and jagged bass lines protude with the vocals, laced with anger and passion, making sure their message gets heard. The audience is a mix of a few die-hard fans down the front who already seem to know the words to some of these songs and the more curious Psych Fest attendees who've braved the sticky steps to check them out, but the response they get in this dark dank corner of the basement suggests that they'll be playing bigger rooms than this on their own quite soon.