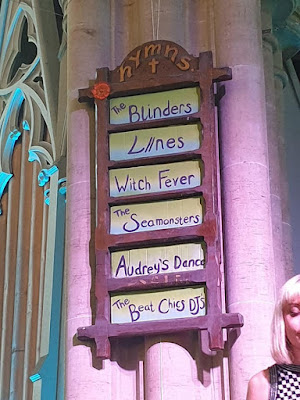 Day One of Blackburn's Confessional Festival in the stunning setting of the disused Holy Trinity Church overlooking the town saw a headline set by The Blinders accompanied by LIINES, Witch Fever, The Seamonsters and Audrey's Dance providing a musically varied evening of some of the North's best and most exciting bands on one bill. 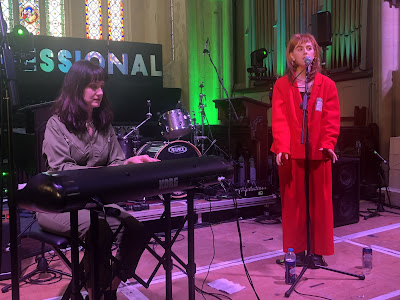 Audrey's Dance are Hannah on vocals and Zeynep on keyboards. It's a simple set up for what they call Twin Peaks inspired dream pop, but it's a perfect opening to the festival, even if Hannah tells us they're the saddest band on the bill and to get all our crying out now. If anything it's her voice, combined with the eerie haunting keyboards, that would reduce us to tears. Don't Panic is all about fear and overcoming it whilst on Tough Love, it feels like every word is being relived over and over again as the emotion in Hannah's voice comes bubbling right to the surface.

There's an awkwardness to the between song chat that just endears us to them even more, as if they don't quite realise how good they are. They demand your attention, which proves a bit difficult for a few of the crowd, but there's moments where Hannah's voice takes on the high notes and silences  everyone with its power and clarity. They finish with a cover of Bat For Lashes' Laura, written about Laura Palmer from Twin Peaks. It's somewhat fitting in the context of the set, but it'd be remiss to categorise them the way they have been. 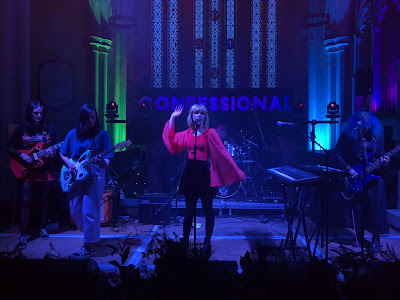 Sheffield's The Seamonsters are up next and once they've conquered some technical gremlins they deliver a set that shows just how far they've come in the past few years. They start with Are You With The Band? and its caustic response "No, we are the band" aims straight for the jugular of those who've dismissed them in the past because of their gender. The likes of How To Be Famous and Hawaiian Space Bop show them heading into heavier rockier territory than the likes of Max And Archie and Blue Movie Baby, neither of which make the set despite being earlier singles, but without losing that element of fun to their sound.

They cover The Ting Ting's Shut Up And Let Me Go and make their own mark on it, whilst a new song that samples Teresa May's leaving speech and then cuts up her words to make other statements before guitars and drums pile in, shows them moving forwards and making anyone who described them as too twee a couple of years back look frankly ridiculous. They finish on Lost And Found, laughing off technical difficulties, to ensure that the growing crowd are fully aware of why their reputation is burgeoning currently. 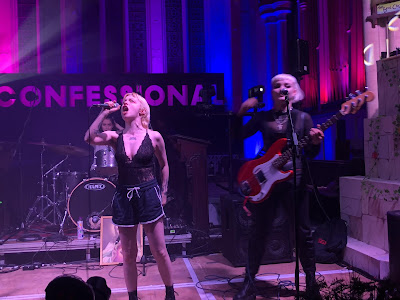 Witch Fever have brought a picture of Jesus with them, Amy tells us that she was brought up in a church and how it messed her up to which Alex replies she wasn't and she still is. It sets the patriarchy up as their target, whether it be the band Bully Boy was written about that demanded they "get our tits out" or the way the music industry treats and dismisses them because they're women. They set about putting the record straight, confrontational both lyrically and visually with both of them ending up in the crowd, and Amy on the pulpit at times during their set.

Musically they've developed into a really tight unit, Alex's bass lines and Annabelle's drums create a rhythm section that provides the skeletal yet steely backbone to these songs which provides further weight to the impetus of the messages they are imparting and makes them far more than just a mouthpiece against misogyny in all its forms, but a band at the forefront of the fightback. 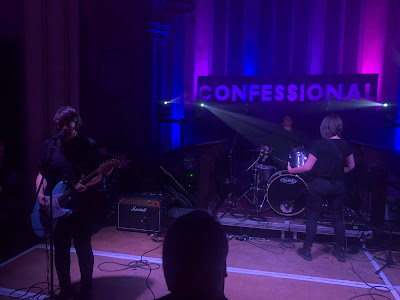 LIINES seem to be on an unstoppable upward trajectory at present with significant radio support, prominent festival appearances and growing crowds, but playing live is what they are about first and foremost and where you can experience them at the very best. Barely pausing for breath, Zoe, Leila and Tamsin power through a forty-minute set of tracks from their Stop - Start debut mixed with new songs like Sorry, Look For You and Where Did You Go? that promise their future is going to be even brighter.

Everything starts with the drums, a couple of clicks of Leila's sticks and everything else powers in behind them. Fast, furious and adrenaline charged songs that change direction in the beat of an eye, relentless in their assault on the senses, pausing only briefly for breath. There's no thrills, no posturing or sloganeering and no fancy moves, so much so that it's something of a surprise when Zoe dedicates their final song I'm Not Afraid to "this shit show of a government." They leave with huge cheers ringing around the church and a whole load of new fans if the reception is anything to go by. 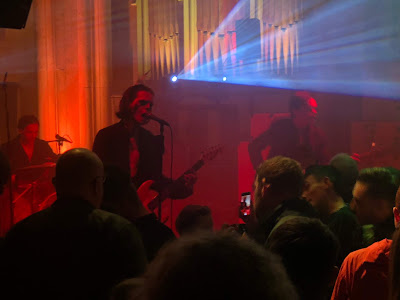 There's a huge sense of anticipation as The Blinders' ten-minute long intro tape echoes around the church. It leads to a huge explosion when the three of them make it to the stage and launch into Gotta Get Through and Brave New World and the area in front of the pews becomes one seething mass of people, some on the shoulders of the others creating a rather surreal picture with the stunning setting of the church's stained glass windows lit up behind the band.

They are at the very end of the Columbia touring cycle, but if anything it feels like they're more into playing these songs than they've ever been. The slightly boomy sound accentuates the anger and the vitriol that's directed at the powers that be in ICB Blues and L'Etat C'Est Moi whilst the new song 40 Days and 40 Nights has the room bouncing again once it hits its chorus. It's destined to become a crowd favourite and surefire single from album two.

There's no let up as the set progresses, the heat melting Thomas's Johnny Dream make-up, Charlie prowling menacingly the stage and threatening the front rows with the head of his bass and Matty at the back directing proceedings, the pace and the energy. New song Something Wicked, premiered at the Museum across town in stripped-down form a few weeks back, broods threateningly whilst Hate Song has more than enough venom to counter the real hatred that it is the  counter to.

Rat In A Cage and Ramona Flowers possess more dramatic qualities, in fitting with the stunning backdrop to their set, and demonstrate the showmanship that The Blinders have developed to accompany the potency of these songs. That's underlined in their final duo of Et Tu and Brutus where Thomas joins us in the crowd for the final two minutes as we reach the apocalyptic ending of the evening.

With that and a few more tunes played by the Beat Chics who've DJ'ed between bands all night alongside poetry contributions from Matt Abbott throughout the evening, that's a wrap on day one of the festival - a huge success both in terms of the bands on show but also the organisation and the way the festival has embraced the Rainforest theme in decking out this stunning disused church.


LIINES' official website can be found here.  They are also on Twitter, Facebook and Soundcloud. They play shows with Bis in October at London Boston Music Rooms (10), Manchester Night And Day (11) and Glasgow Mono (13) and support Ladytron at Manchester O2 Ritz (19).