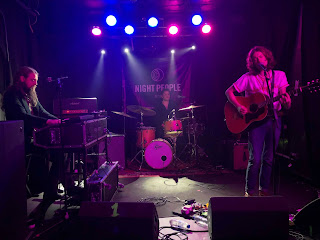 Live outings for Coby Fletcher are a rare occurrence so Night People on Thursday night was a must for anyone who wanted to see what one of the city's most modest yet talented songwriters has been up to in the two and a half years since he left Cupids. Support came from Ashley Sherlock, Leon The Pig Farmer and Secluded Sea. 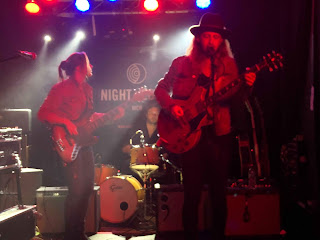 Ashley Sherlock opens up proceedings with a set full of guitar wizardry, aided and abetted by Charlie on bass and Danny on drums. Songs feel more like fluid jams, letting loose and loving their instruments as the three of them clearly revel in being able to come together and play in front of an appreciative audience. That fluidity doesn't however dilute the strength of the songs in their own right - their first ever single Run is impressively bold and confident, Atlanta from the debut album takes us on a journey where we're carried on the weight of their musicianship and the ability to lock into a groove and keep us reined into it. 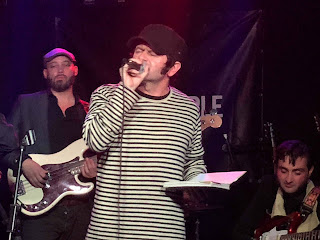 Between acts we're treated to poems from Leon The Pig Farmer. Moving between stories about mental health from his teenage days like Occupational Health Terrorist and his experiences in the army of Toy Soldiers, his poetry feels personal and relatable rather than the political shouting into an echo chamber or weak attempts at humour and in-jokes of some of his contemporaries. No longer does a poet between bands elicit a groan from us. 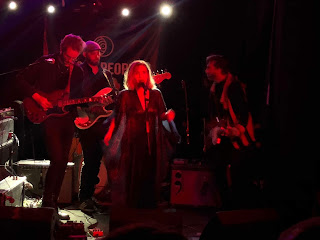 Next up are Secluded Sea and this is the first time we've witnessed them as a five-piece. It bulks out their sound considerably yet doesn't dampen their ability to craft wonderful drama from their instruments over which Angela acts out the lyrics to songs like No Tears and Waves. Their next single Run and another new song called Rain are the highlights of the set, proof that they're moving forwards and upwards as a band. Their love of what they do is very self-evident and it adds gravitas to these songs - yet there's a lighter side to them evident in final song Veil where Angela jokes that she needs to not pretend to be Michael Jackson. Fortunately she leaves the impersonations behind and loses herself in the magic created by her band mates in a soaring climax to the set.

The word long-awaited has rarely been so relevant as in describing the wait for Coby Fletcher's album. Tonight he promises it will be out by the end of the year as he reveals a mix of songs we've heard at his rare live outings plus a whole batch of new material. With Adrian on a bank of keyboards and pedals and Ben on drums, with both providing backing vocals, it's an impressive power trio that take us on an hour-long journey through one of the smartest focused musical minds around at the moment. Every level of detail in these songs feels like it's been pored over, when in reality it's probably just natural talent that Coby will modestly play down but over which the rest of us just marvel. 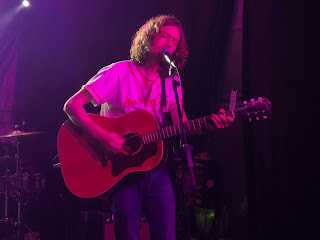 There are some familiar songs in here - No One Talks harks back to the days of his previous band Cupids as does Cover In A Storm, but here they're very much revisited and reworked with his own vision rather than that of a band. There's moments where the songs are politically charged - P45, Farewell The Fair System and the Bush and Blair baiting of Power Never Changes - but they're targeted, pointed and specific rather than the vacuous sloganeering that often passes for political or social commentary in songs these days.

There's a rich variety running through the veins of these songs too - there's church organ sounds, stripped down moments and then all three of them will let loose. Duracell very much fits into the latter category and is one of the highlights of a set that doesn't really dip at any point, which doesn't surprise us given Coby's reticence to put material out there without it passing his highest quality standards. Even then he tells us he usually hates his own tunes.

They finish with a duo of Beatles songs - A Day In The Life and Tomorrow Never Knows - and we're simply blown away by how they take these classics and make them their own. We often argue young bands should rely on their own material rather than throw in covers but we'll make an exception when it's delivered like this. But tonight was about revealing the songs that will make up this album - our appetite is now even more whetted than ever before.