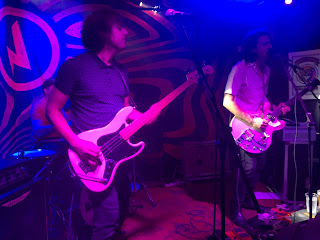 Hey Bulldog sold out their biggest headline show to date at Jimmy's in Manchester on Saturday night. A packed room gave them a rapturous response as they launched their new single Death And Greed supported by Gardenback and Bleach Bod at the latest of Deco Records nights. 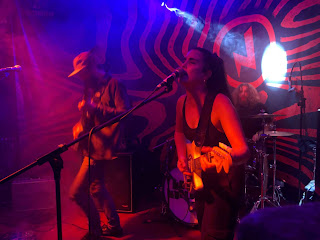 Unfortunately we missed opening act Pool Sharks and much of Bleach Body's set, only catching the last three songs, but that was more than enough to want to catch them in full. The trio have a really ferocious energy to their live set, both sonically and visually, not holding anything back as they power through their songs. The brilliantly titled I Am Not A Punk I Just Can't Sing would be worth the admission price for the whole night on its own and is hopefully going to feature on their first EP that they're in the process of recording. A song about Ioanna's home land Greece finishes the set and has us wishing we'd got down earlier. 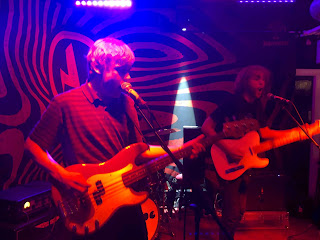 Gardenback appear to have been hard at work writing new material given that there's a lot of unreleased material in their eight song set and some of their early singles have already been dropped from their set. Sleepless remains but sounds a completely different animal to how it did two years ago, but it's the likes of LOL, Heart Breaks Twice and Cynical Guy that really stand out and go down incredibly well with the already packed out crowd that are struggling for vantage points.

Like their older material, the new songs are at their best, their most potent then Ellis, Neil and Jacob's vocals combine to lift the songs, give them added impetus and make Gardenback stand out from the crowd. They rarely put their foot on their brake during the set, but the audience absolutely love them. 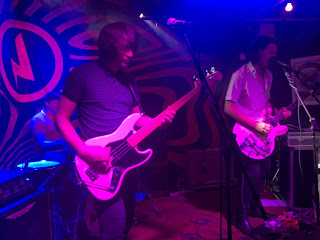 It's Hey Bulldog's night though, a celebration of the new single but it feels like a gathering of everyone who's followed them on their journey as they look to move onwards and upwards. They start with the new single, a typically awkward move for them as they're a band that focus primarily on the music and what feels right to them rather than the easy more commercial path. It probably holds them back a little in terms of getting bigger, but their integrity and their desire to write and play the songs that feel natural to them is non-negotiable.

There's no flashy gimmicks or studied poses either, just genuine talent that looks like this is what they feel they were born to do. They look lost in the moment at times, each one of them in their own world, but with an invisible intuitive connection to the other two. When they have technical problems at the start of No Future Part I it feels a bit awkward because they want to be playing rather than having to talk to us, but it's soon resolved and the two parts of the song make perfect sense now they've finally be joined together at the middle, in the middle of the set.

Songs like Al Lupo, Under My Spell and California, all previously singles, come alive in a hot dark and sweaty room where the audience can lose themselves in the music in the same way the band do. And it's in their approach to their music that Hey Bulldog stand out - the recorded version of the song is just a template for the live performance rather than the detail which is more looser and fluid in its creation and the hundred and twenty of us packed tightly together understand that..

There's a phenomenal amount of love and energy in the basement of Jimmy's for a band that's always been the underdog and done things their own way, but like certain others the ground seems to be moving, creating opportunities and opening doors. It won't be their last sell out show that's for sure.