TRACK OF THE DAY : Jordan Allen - Never Give It Up 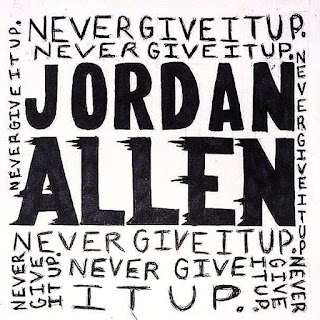 After eight months out in the wilderness, Jordan Allen is back with a fiercely independent new single Never Give It Up and a new band.  Having already sold out Gorilla in Manchester three months in advance and with a set of new songs readied for release, he's destined to make good the years of waiting and to do it on his own terms.

A split from management and the loss of two key band members (guitarist Danny Quinn and drummer Nathan Howard) could have sunk many artists, particularly one like Jordan Allen who'd worked so hard to get themselves into the position for several years with singles like R.O.S.I.E and Helter Skelter combined with high-profile festival and support slots.

Jordan's back with a new band though featuring original bassist Kieran Loughran alongside three new members - identical twin brothers Cameron and Kurtis Maunder on guitar and Ailis McKay on drums. Never Give It Up is the first product of sessions with producer David Rahad-Jones and harks back to the furious energy of his early material.

If it feels like he's turned back the clock and started again somewhere back down the line then it's because that's how Jordan himself sees it, explaining "This is the sound that I’ve always wanted to create; it’s honest, real and it’s in your face; it’s the perfect track to come back with. Things got to the point where were just being told what we couldn’t do, now it finally feels like I have control again and I’ve never felt as confident about material I’ve written, and we have three even bigger tracks recorded and ready to go after this one. We’ve all worked so hard to get back here and we are fiercely independent now, we’re doing it all ourselves. I just want to thank everyone that supported us and didn’t let us quit when it got tough."

Jordan Allen plays at The Etihad Stadium ahead of Manchester City's game on October 6 before a sold-out show at Manchester Gorilla on October 26 then supports The Slow Readers Club at London Boston Music Rooms (December 17), Wolverhampton Slade Rooms (18), Manchester Ritz (19) and Glasgow Garage (21).