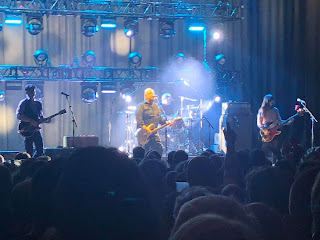 Pixies' huge European tour in support of their seventh studio album Beyond The Eyrie hit Manchester Apollo on Wednesday night for a sold-out show that covered all seven of their studio albums across a mammoth thirty-seven songs, focusing heaviest on the new record and their classic Doolittle. Support came from The Big Moon.

The Big Moon open with a seven-song set, three taken from their forthcoming (January 2020) album Walking Like We Do including current single Your Light which finishes the set and previous single It's Easy Then which even has Fern playing brass over the top of her drum kit. Alongside Don't Think, which surely is a contender for completing the hat-trick, it shows just how far they have progressed between albums. 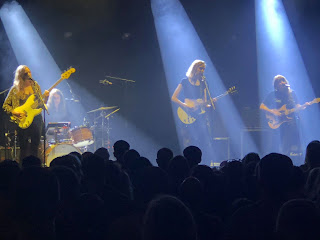 That's not to diminish the impact that the quartet of singles - Silent Movie Susie, Sucker, Bonfire and Cupid - from their debut album Love In The 4th Dimension make, once the sound problems in the first two songs are resolved though. Upbeat, fun and playful, they slowly get the Pixies crowd on-side as the set progresses as Soph and Celia's harmonies and backing vocals help to lift Juliette. As ever they look like they've having the best time, coming together to play, Juliette bounding around when she's freed from her guitar on Bonfire and genuinely relishing the opportunity to play with one of their favourite bands.

Pixies gigs these days are no frills and all about the music. None of the four of them utter a word to us as they plough through a mammoth thirty-seven songs in an hour and fifty minutes. They play all but one song (Long Rider) from their new album Beneath The Eyrie that came out last Friday - but counter that amount of brand new material with just three songs combined from their other two post-comeback albums Indie Cindy and Head Carrier.

That leaves plenty of room for crowd favourites and one glance around the room tells you that this is an audience that grew up with Surfer Rosa and Doolittle and the way the audience changes from a heaving mass or a throaty choir (particularly on Here Comes Your Man, Monkey Gone To Heaven and the stripped down UK Surf version of Wave Of Mutilation) to a listening throng of people for the new material and then back as the set diverts its way from one part of their catalogue to another. 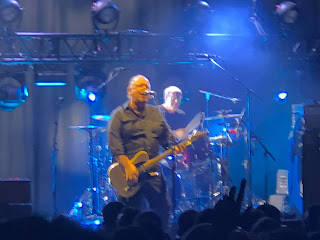 Some of it is down to the music though - you can't take the anger and passion of youth of the nineteen eighties and maintain it for thirty years, you have to adapt and Pixies have done exceptionally well at maintaining their DNA, but living life these days a little more sedately.  The old songs still though pack that remarkable punch that made them such powerful inspirations for the bands that stole their thunder when grunge took over the world.

This tells us a lot about the state of the nostalgia trip that prevents most bands of a certain age's new material from really taking hold - even though the likes of In The Arms Of Mrs Mark And Cain, Silver Bullet and On Graveyard Hill from Beneath The Eyrie demand your attention. The fact that they play pretty much the whole album shows you exactly where Pixies stand on this too - they'll give you the old favourites you crave, but you have to listen to this too - exactly how it should be.

Frank's voice has survived remarkably given how much he puts into every performance and Paz has replaced Kim Deal in the only way you can do successfully, by not trying to be a replacement but by being herself. Joey let loose on his guitar, lead unplugged in the middle section, on Vamos and again on the main set closer, a cover of Neil Young's Winterlong, to remind us that this is no one man band and David, like many drummers, never quite gets the credits and accolades he deserves.

Pixies' steadfast refusal to deal in niceties like setlists mean that we're taken on a journey throughout the thirty-seven songs of the set, there's no slow build here with hits at the end, a couple of new songs thrown in early to get them out of the way or any such tricks that other bands might play. This is off the cuff and unpredictable and absorbing as a result, yet it's also immaculately and precisely delivered with no posturing, empty sloganeering or unnecessary showmanship. Pixies always were a great live band, they still are.

Email ThisBlogThis!Share to TwitterShare to FacebookShare to Pinterest
Labels: Pixies, The Big Moon