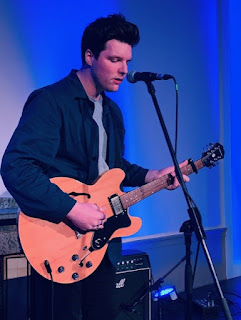 Michael Timmons is a young man who has come of age since the release of his beautiful debut album Bone Coloured. A star that shines bright in the sky above. Jason Wynne caught his sold-out performance at Aberdeen's Big Sky Studio as part of the inaugural True North Festival.

Recognised by, and earning support slots with, the likes of the superb Out Lines project (James Graham, Kathryn Joseph and Marcus Mackay) and Scottish doom merchants The Twilight Sad, Michael’s haunting sound mesmerised the heaving Big Sky Studio on a special evening. It’s testament to Michael that his show was the first to sell out at the True North Festival in Aberdeen and he didn’t disappoint.

One man, one voice and his guitar making the most beautiful of noises to a highly appreciative audience who are respectful of what he is doing. You can hear a pin drop which is something quite refreshing as you don’t often get this at gigs these days as people, rudely, chat away. This further enhances his reputation as a singer-songwriter that people want to hear.

Painting kicks off proceedings. The opening track from his debut album and it’s impossible not to melt when you hear the emotion in his voice. “Are you finished yet? Time to forget” he eerily sings as the audience stand motionless, in silence.

Michael’s stripped back approach doesn’t necessarily mean his songs don’t sound huge because they do. Songs like Material and Hold On Sea (with its “Won’t you wait for me” plea) contain waves of layers that add extra depth and meaning to them. Emotionally confounded they resonate with the listener.

Hold On Sea has the added emotion of being dedicated to his friends, who are present, who married recently. A lovely touch from a genuinely nice guy and they are clearly thrilled by the dedication. Congratulations if you’re reading this!

Fall Back, by his own admission, is pretty miserable although musically it’s quite exquisite and yet he warns us it isn’t going to get much better from here on in.

He jokes the next song might be a bit more cheerful. It’s the first time he’s played it so he asks we go easy on him. The title? 10 Days Before You Died. Michael’s ability to raise a smile from within the misery always shines through with his wit making it easy to win over any audience.

New songs like Crowd Below, Agonal and Theatre show the maturity in his performance as we look forward to a second album. His ability to make sounds on a guitar that seasoned campaigners could only dream of making mark him down as somewhat of a magician. His swirling guitars, feedback and reverb aplenty too, take us on a musical journey of misery...by his own admittance.

His unassuming, humble, interaction with the crowd is full of apologies of his miserable music although he recognises that’s why we’re here because after this we’re off to see The Twilight Sad anyway.

With the beautiful range in his vocals and the virtuoso guitar playing Michael parts with the haunting Distant Relative, completing a set of emotionally fragile songs glued together by the adhesive that is the guitar and amp making the show all the more powerful to the avid listener. The humble Timmons departs the stage to rapturous applause with the crowd no doubt looking forward to his next appearance. A star that shines bright in the sky above indeed.