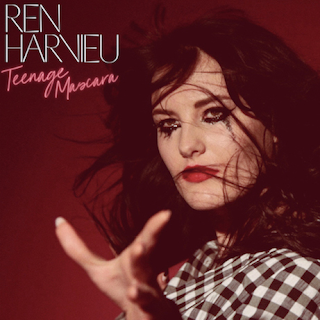 High on the list of things we've been waiting for a very long time for was the return of Ren Harvieu. Seven years on from her top five debut album Through The Night, she's finally back with a single Teenage Mascara, the first track to be taken from her second album due for release via Bella Union in March 2020 written with The Magic Numbers' Romeo Stodart.

Our first encounter with Ren was at Hackney's St John's Church, supporting Elbow for a charity show. Chronically nervous and still suffering the effects of an accident where she broke her spine, it only took her the first verse of her first song to convince us that this was a special talent. A year later she played to absolute silence in the intimate surroundings of St Pancras Church in London to launch her debut album and it felt like a star had been born. The album went top five, but things weren't right and six months later she found herself without a label, but with a band of admirers who had fallen for a voice that simply stops you in your tracks.

There's been plenty of false starts since then, promises of new material that never came about as Ren sought to find herself and be able to express herself though her music in a way she hadn't been able to on her debut record. In the accompanying press release for Teenage Mascara she explains "I did help write a few of the songs on that record, which I’m still very fond of, but I felt more of a mouthpiece for someone else’s talent, which eats away at you especially because I had so much to say lyrically I just hadn’t learnt how to as yet. I couldn’t fathom that people were responding to the emotion in my voice. Maybe I was scared of harnessing it’s real power."

Fast forward to 2015 and meeting up with The Magic Numbers' Romeo Stodart who had emailed her asking if she would like them to write together. Two years of writing, lots of listening to music, drinking and dancing later and the songs were born for the second album and like The Magic Numbers' work as well, time takes second place to ensuring that the finished product is the perfect embodiment of what the creator intended - "I wasn’t in a massive hurry, because at last I was having fun. I felt like I was re-discovering a girl who had been hidden, quietened. I’d tell Romeo, I don’t just want to paint pretty pictures I want to revel in the drama of my life, the good and the bad, before I was afraid to say something in my lyrics, but no longer. I felt free."

That comes through in the lyrics of Teenage Mascara, a song that traverses the emotions that most people feel, from being on top of the world to being down in the dumps as Ren explains - "I see Teenage Mascara as a dance between the many versions of ourselves. The woozy, dreamlike intoxication of the music helps swirl those emotions we sometimes have where we can go from feeling like sultry sex kittens to being bedridden with despair and greasy hair. I think it’s important to celebrate it all, the sass through the tears, the vulnerability behind the make up"

The album is due out in March 2020 via Bella Union and Ren plays two shows at Manchester Deaf Institute (October 22) and London Mirth Marvel and Maud (24).