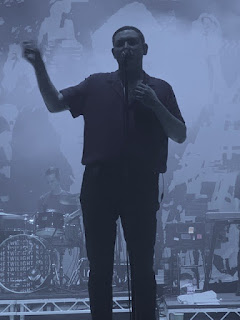 It’s safe to say The Twilight Sad haven’t had an easy ride throughout the many many years of their turbulent existence. Through the adversity they’ve come out the other side stronger than ever and the bands much anticipated return to the Granite City headlining the True North Festival feels like some sort of triumph and rightly so.

After a five-year absence from Aberdeen the band return in celebration not just of their critically acclaimed Number 1 Scottish album and Top 20 UK album It Won/t Be Like This All The Time but to perform the older songs that helped nurture them and put them where they are today.

Successful support slots with The Cure are one thing but The Twilight Sad reach their ultimate peak when they play headline shows to their own audience and the iconic surroundings of the packed historic Music Hall are the perfect setting for an electric evening of intimate unbridled passion. This is a big deal to the band and to the fans. You can sense it in the cavernous space as band and audience alike reciprocate the love through the darkness although tonight’s lighting show is fantastic too possibly indicating the bigger stages are looming.

The opening trio of [10 Good Reasons for Modern Drugs], VTr and Last January set the tone for an intense, enthralling evening as the masses at the front bounce about in jubilation of their heroes.
Modern Drugs is now the natural perfect opener to any Twilight Sad set - its upbeat intro going against the notion they’re just a miserable band.

VTr, one of the singles of the year, is sung back between audience and James with equal passion and intensity. Of course James has us all in the palm of his hand, we’re hanging on every word, and to hear the ecstatic crowd singing back “there’s no love too small” with such devotion and fervour will live long in the memory.

Three songs in though and we are literally dead on our feet because old(ish) favourite Last January, brilliant as always, is just brutal. James, looking more up for it than ever (if that’s possible) probes the crowd, prompts us and lures is into his mind as every single person in that hall sings back “you are too old to fare on your own” as the love and unity between band and crowd grows. An unbreakable bond between a band and their passionate followers. The appreciation they show not just after one song but every song is heartfelt. Still humble, still more scintillating than they ever probably realise.

Two more songs off the new album in The Arbor and Let/s Get Lost are aired. The Arbor offers us the brief respite that we need after those first 3 hammer blows. Johnny’s bass ambling, undulating, twisting and turning as we sway from side to side, arm in arm, drifting and lost in the moment, the song offering some crumbs of comfort until the abrupt eerie ending with the words “why did you leave in the night?” but there’s no time to dwell or ponder as Brendan’s keys and the majestic drumming of Seb signal it’s time for more havoc down the front. “I see it coming, I still do nothing” screams James during Let/s Get Lost as Andy unleashes the axe, scything down anything in his way.

Crowd favourite Reflection of the Television has the congregation singing in unison as James ducks and dives, throws himself about and tells us he’s “more than a fighter you know”. There are times in tonight’s show when James looks happier than I think I’ve ever seen him on stage although with certain songs the fragility and the delicacy of it all shines through and this is one of those songs. Baring your soul on stage each and every time you get up there is tough but it’s what makes James, the band, the people that follow you stronger. It’s therapy for the masses. A two way thing which consistently carries us all through an emotional night.

I/m Not Here [Missing Face] could be out of a horror movie. Its claustrophobic and its uncomfortable. James screaming at us “you’re too close for comfort” while the rest of the band batter and bruise you with no thoughts for your mind, body (especially the ears) and soul. 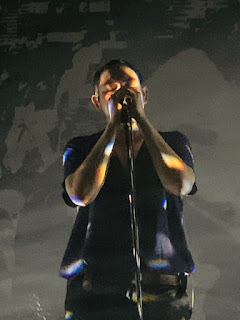 The squalling guitars and incessant beating of the drums leaving you to lick your wounds before James tells us “It Won/t Be Like This All The Time” during the maudlin Sunday Day13 which culminates with the ghostly keys of Brendan.

The strangely beautiful silence that follows that song leads us perfectly into There’s a Girl in the Corner. The booming drums of Sebastien Schultz reverberate around the hall and we know what’s coming. James is mournful as he tells us “she’s not coming back” as the intensity of his vocal increases. The stunning piano / key melodies that accompany this song are haunting and memorable. As James pirouettes the stage he leaves us all in a spin appreciating the song for what it is. A true masterpiece.

The stomping Girl Chewing Gum sees Andy MacFarlane’s genius come to the fore once again with his soaring, searing guitars lifting us to another level. Those down the mosh pit let themselves go more than ever as James bawls “Put me in the ground, I don’t want to be here anymore”. He sings it with such venom and vitriol showing us the contrast in their music throughout the whole set - darkness and light one minute, misery and joy the next. It’s staggering to witness and there’s not many bands out there as honest and emotive as this.

The synth-drenched Videograms is hypnotic with everyone singing back to James “don’t you start on me” with such luster as he questions everything, everyone. “Is it still me that you love?” he asks, unsure, but the love between band and audience is unquestionable.

The Twilight Sad care. They matter to so many people and it’s evident they are socially aware of everything that is going on around them as James dedicates Cold Days from the Birdhouse to Ruairidh Sandison (“this one’s for you”) who recently passed away in circumstances incomprehensible to his friends and those that didn’t know him personally but were touched by his sad loss.

It’s comforting that his friends are just yards away and they are deeply moved by the beautiful dedication. If truth be known we’re all friends in this room and we all sing along for Ruairidh and for others we miss and still think about every day. While James has previously told us he didn’t particularly enjoy people singing this song back to him now he embraces it and rightly so as this song is cathartic and just maybe tonight the best version of the song I think I’ve ever heard. As the anthemic “and your red sky at night won’t follow me, it won’t follow me now” rings out every hair on the back of your neck is up and people hug each other - there is a light that will never go out.

The Wrong Car is its usual ferocious best as James gesticulates, bounces about, deranged, manic and frenzied. It’s such a personal song that you can’t help but think James is living this story out on the stage with his parents and family looking on, The Twilight Mum and Dad, proud and teary eyed witnessing James and his mates deliver a near perfect performance.

If you thought that was the end of the tears then you’d be mistaken as Keep Yourself Warm takes it up an extra notch. I’ve said it before and I’ll say it again - I swear James can see Scott looking on with that infectious smile of his when he looks up to the heavens. How James manages to contain himself and hold up performing this song is beyond me. It’s mentally and physically draining for the audience, let alone the band and front man. It’s poignant and it’s beautiful and as the tears flow and the strain of the song takes it all out of James I look back and see a room full of love, hope and strength. The message is simple. Look out for each other, always. If you’re not okay tell someone. It really is okay to not be okay.

From the tears come the joy and with And She Would Darken the Memory the band are ready to go one last time. No encores with this band. What you see is what you get.

James fondly talks of Aberdeen with family and football connections and even offers a wry smile. I’ve seen him smile more tonight than ever and it’s evident that they’re winning the battle to be acknowledged for what they’re doing musically and personally.

There’s thanks to the mystery MySpace fan who told them to keep doing what they’re doing all those years ago and, of course, to messrs Moffat and Hubbert - inspirations from the start.

There’s more genuine heartfelt thanks to every single person that made the journey including someone who had travelled from “Wodonga via Coventry”.

“We don’t even know where Wodonga is but thank you!” quips James.

It’s evident to all that this is a big deal playing Aberdeen for the first time in a long time and the delirious crowd let them know their appreciation as the band pull together for one final push. Everyone sings “the rabbit WON’T die” with such gusto as they put the boot in one last time ending with a crescendo of noise. As James screams and hollers he sinks to the ground, exhausted but elated and enraptured.

The weight of these songs takes every last bit of strength from both band and audience although James drags himself to his feet and in reference to his beloved Aberdeen Football Club tells us to “Stand Free”.

A fitting end to a magical night that had a feeling of some sort of homecoming such was their triumphant return to the port city. Aberdeen confirmed they are ready to go to the next level and carry on the fight.

Bands like The Twilight Sad are few and far between these days. The power is in their music and their humane outlook on life. They are integral in the lives of those that live and breathe them. They are the bringers of joy through the misery and sadness and their existence, like oxygen, is essential to the survival of others who face adversity on a daily basis. That should never be forgotten.


The Twilight Sad's official website can be found here.