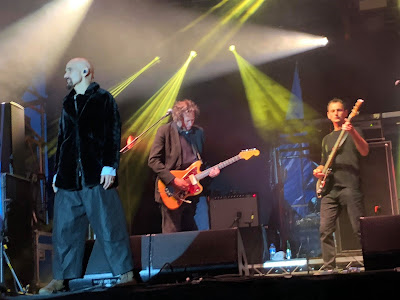 James headlined the final night of the inaugural Bingley Weekender on Sunday night, their last UK show before taking a well-earned sabbatical, with a set laden with hits and tracks from their recent top ten album Living In Extraordinary Times. Across the other stages we also caught impressive sets by Dirty Laces and Anteros.

Dirty Laces are riding the crest of a wave at the moment, their Gorilla show next week sold out way in advance and they bring a whole load of confidence to their late afternoon set on the New Music Stage where they win over an audience of all ages, most of whom would have known little if anything about them beforehand. Their approach is big and ballsy, two or three guitars at a time creating anthems whose genesis is in their influences, but whose heartbeat is very much in the here and now. 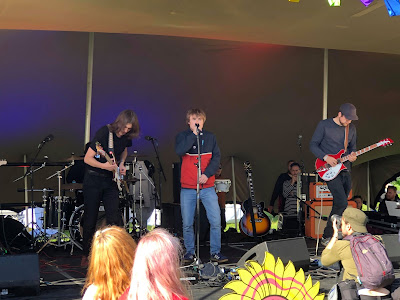 Charlie's growing in confidence as a front man, his voice stronger as a result and when Luke or Jacob let go with a guitar solo, they become a real fearsome rock and roll band. The likes of Lose Control, Moving Pictures and Set In Stone go down a storm with the youngsters down the front and further back there's a few older heads nodding in appreciation - and they leave with applause ringing in their ears and the satisfaction of a job well done.

We then hotfoot it over to the Discovery Stage for Anteros. They've blossomed as a band over the past few years and are now worthy on a spot on the main stage, such is the star appeal of Laura and the way she's supported by Josh, Jackson and Henry who create the sonic framework for which to work her magic. Songs like Afterglow, Call Your Mother, Fool Moon and Drive On from their wonderful debut album When We Land are unapologetically fun but serious at the same time, whilst their self-titled track Anteros is a perfect set-closer, anthemic and easy to sing along to even if you don't know the words beforehand. 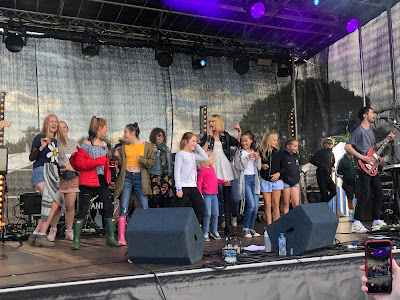 Laura invites all the women in the crowd up on to the stage for Bonnie, and once the bemused security have let them past, she goes and acknowledges every single one of them from the young girls through the teenagers to the older women who made the first move. It's genuine, creates brilliant memories for the kids and places her close to the top of the queue of modern female icons which she tells us there are too few of. Drunk and Breakfast emphasize that behind the shiny dress and beaming smile she's not to be messed with. It's a pity more people couldn't drag themselves away from Miles Kane's lads set on the main stage, because Anteros were truly inspiring.

This is James' last UK show for a while as they take downtime before going to record album sixteen and they aim to go out in style. They start off with a couple of singles - Waltzing Along and Ring The Bells - and Tim Booth is already off amongst us making use of the specially crafted ramp and stairs to get closer to us. To Bingley Weekender's credit they allow this to happen rather than the draconian steps some take to prevent it, and it makes the atmosphere red-hot from the start, both from long-term fans and the locals who are here for the party.

Two new songs follow, the powerful drum-heavy Trump-baiting Hank and a winding wonderous What's It All About. You sense that they're on a real roll at the moment, fluid and pushing the songs as far as they can take them. Tomorrow takes Saul aback, as he emotionally tells us he's forgotten how great a song it was as they play it so little. The woman doing sign language shares his excitement as she tries to translate his impromptu speech.

Just Like Fred Astaire is stripped down and sees the first flare of the evening let off by a group of youngsters a dozen or so rows back in the centre. It's intriguing how much they're into it, causing a moshpit, on each other shoulders and responding to the new songs as much as they do the old ones - a real testament to the new songs passing the test of those who aren't tied to a generation when reacting to songs they hear, something Tim later comments on. It also shows there's a whole world of youngsters out there who don't want to be spoonfed the latest new thing. 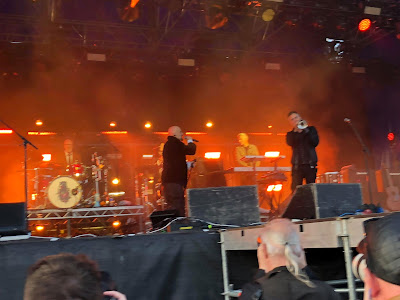 They decide on the spot to play She's A Star electrically instead of acoustically, seemingly conscious of keeping the pace of the set going given a late start and an early curfew that they can't overrun, but then drop down in a deliciously soothing Five-O. Moving On is dedicated to those who have lost people and soars through the rapidly darkening and cooling night air.

Many Faces sees Tim back out in the crowd, managing to wiggle free out of the clutches of security and surf right to where the moshpit and flares came from in the areas Tim calls "hormones" as the crowd take the song away from them. Leviathan is gloriously uplifting and looking around at the response it gets, it makes the claim that bands should just play their old hits look frankly ridiculous. As it drops down to Tim whispering in the middle before stopping and then roaring back to life, there's a roar as loud as anything else all evening.

We're told there's only fifteen minutes left so they'll start with Sit Down and it's played as straight as we can recall it for a long time, but it's the first of four big songs to finish the evening off with a bang. Getting Away With It (All Messed Up) has become their anthem, and remains one of their best-loved songs despite it not really being a big hit at all. Looking up at the stage, we see Andy having the time of his life and Saul focused and in the moment and it feels sad that they need to go and recharge their batteries right now.

Tim looks round and says "Sometimes" and the band start up Come Home. With the curfew fast approaching it's a clever move as Tim later tells us "an arbitrary policeman" has told him they can play Laid as well because it's his favourite song. It's preceded by Tim asking the sign language woman how she is going to do "she only comes when she's on top" and he asks her to repeat it again at the end. So we get two songs instead of one and a three minute bounce-along to send everyone home with a huge grin on their face.

One last word about the festival - it was an absolute pleasure to attend it, access was easy, bar and loo queues were at a minimum, the ground under foot was well protected, security friendly and not over-zealous, turfing out one troublemaker near us who was identified by those around them and three stages were put on without too many issues of sound bleed.  The only downside were food queues and the quality near the Discovery stage, but for a first event it was a real success.

James played Waltzing Along, Ring The Bells, Hank, What's It All About, Tomorrow, Just Like Fred Astaire, She's A Star, Five-O, Moving On, Many Faces, Leviathan, Sit Down, Getting Away With It (All Messed Up), Come Home and Laid.