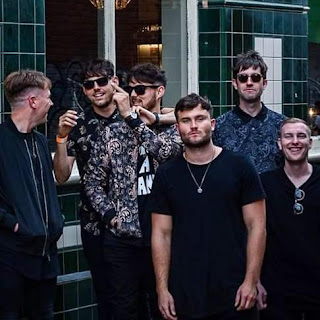 Reclaim Vienna have already made their mark in Manchester, recently selling out Gullivers weeks in advance and their November Bread Shed show looks to be heading the same way. With their debut single proper Kick The Butterfly out today via 42s Records, we caught up with front man Jonathan for a chat.

Could you introduce Reclaim Vienna please?

How did you get together as a band?

The core of the band met through a shared love of music and growing up in Winsford. After some success with a previous band for a few years, Danny and Ryan wanted a change sonically which led old members parting ways and the addition of myself as front man and Paul hill on bass.

I was approached by Danny on Instagram, he sent me a few tunes which I instantly liked, met up for a few sessions and that was that really. Hilly had played previously with Danny and Ryan and had always played well with Ryan on drums as per Danny, so again he was asked to join the rest of the band and Reclaim Vienna was born.

It’s an intriguing name you have. How did you come up with it?

We’d been messing around with a few names but nothing had stuck or grabbed our attention for a while. I think one night after practice we were talking football; Danny, Ryan and Hilly are big Evertonians. I’m a big Liverpool fan and Harlow and Harry both United, so as you can imagine football talk is interesting! Anyway, the lads were talking about Everton and their 3-1 win in the European Cup Winners Cup against Rapid Vienna. This then led to to someone shouting Reclaim. Why? I have no idea! Someone then added Vienna, Reclaim Vienna. We loved it instantly and went with it. I think like most things in life, the best things come out of nowhere!

In the early days Danny would come with an acoustic structure and lyrics and we’d build on that at practice and turn it into a song, this was the case with Kick The Butterfly.

Now, we tend to start with a synth backing or loop that either Harry has brought to us or he’s messing around with at practice. Danny will then usually add the lyrics or melody, then collectively we’d add our own parts to create a song. Our sound is evolving at a rapid pace and you can hear that in our latest written songs. We have found what we called the Reclaim Vienna sound now and writing together at practice currently is easy and enjoyable, the songs keep coming and are stronger every time.

Could you tell us a little about what the single Kick The Butterfly is about please?

In Danny’s words.. The song is written about wanting to know everything about someone, good and bad. It also conveys messages about anxiety, the chorus especially. "I stomp on mines, I’m caught but I’m sure in time, I’ll kick the butterfly." It's the fear of something bad going to happen when things are going well.

It’s coming out on physical formats, something many bands at your stage of your career avoid because of cost. Is it important for you to have physical product out there?

The physical product simply came with signing to 42s Records, which of course we are delighted with so early into the bands existence.

42s Records had been tracking us ever since our first demo release of Paris. They were really into it and wanted to hear what else we had. We sent them a demo of Kick The Butterfly and the rest fell into place. We signed with them in August and obviously now Kick The Butterfly is out a month later.

As a band or musician, fans buying your songs because they love it is one of many aspirations! We want to create music that people enjoy and if they want to support us and buy it then that’s important to us! It’s hard as you say for new bands, usually due to cost. We were lucky as we got picked up and early but now we’re going to keep creating music that people want to collect and buy!

You’ve already sold out Gullivers well in advance and your November Bread Shed show is selling fast. Are you surprised how quickly that has built for you in Manchester?

Comparisons have already been made to New Order and The Slow Readers Club, both Manchester bands and influences so I’m not surprised Manchester has taken to us kindly so far! That’s not to say nowhere else will, because I’m confident we can go all over but Manchester with its musical heritage and love for music and upcoming bands like ourselves was always the first place we wanted to build a following. Plus we’re now signed to a Manchester indie label with ties to a Manchester nightclub. Sounds familiar doesn’t it?!

We’ve bumped into you a few times at gigs around town. Do you think it’s important to be out and about supporting other bands and growing a scene and network?

We will always support other bands and try to get out to gigs when we can. There’s so many good upcoming bands around at the moment and lots in Manchester. There is always a new scene somewhere ready to explode, it wouldn’t surprise me at all if it was in Manchester and hopefully we’ll be at the forefront of it!

As mentioned we are headlining The Bread Shed, 30th November with every intention of selling it out! Which for a new band like ourselves will be some statement and also hard work. We will be releasing another single before the end of the year ready to go into 2020 with the intention of growing a bigger following hopefully through some big support slots and festivals. We will no doubt be releasing more music, whether that’s a single, EP or Album you will have to wait and see!

How would you describe Reclaim Vienna to someone who’d never heard your music?

Nightclub music with a pop twist. Big, catchy choruses with pulsating synth tracks. Dance music with guitars! Which all are evident in our debut release Kick The Butterfly which of course you can listen to or buy now!

Kick The Butterfly can be purchased here.