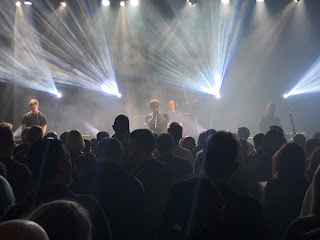 Ist Ist played a triumphant sort-of-homecoming show at Bury Met on Saturday night as part of their nationwide tour ahead of going into the studio to record their debut album. Mixing their early singles including the resurrection of an old favourite with tracks from their two EPs and giving us a tantalising taster of the songs that will form the album. Support came from Bolton's Our Fold with tracks taken from their recent debut album Sick Of Normal Life.

Our Fold take the stage to warm applause. They've brought quite a few from up the road in Bolton and by the end they've won over a few more admirers. They've been around for what seems like an eternity, being one of the most prolific bands on MySpace back in the day, but it's only this year that they've managed to release their debut album Sick Of Normal Life, testament to the hard slog that bands have these days if they don't fit a mould or get the breaks. It's clearly not the music that's the issue when you listen to these huge anthemic tunes that they've created or watch and listen to their musicianship on this big stage. 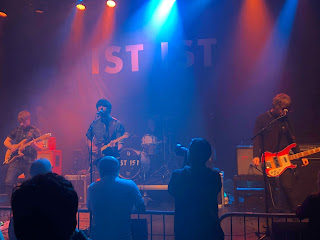 As you'd expect, the set focuses on Sick Of Normal Life with headline tracks from it like Two Little Angels, Terrific, She Goes On and the album and set closer Passing Over. Damien introduces She Goes On as being the first song they ever wrote together at an all-night writing session in Westhoughton many many years ago - and yet it still sounds as fresh and uplifting as it did way back then. Despite describing himself as "a bellend" when doing the band introductions, he's far from it, you see the passion etched in his face as he delivers these songs powerfully cutting through the wall of sound that his bandmates create with each song.. Their fight to get the recognition they deserve goes on.

It's a fight that you sense Ist Ist are slowly starting to win, through word-of-mouth and picking up new admirers from curious onlookers on nights like this. With the Met's glorious sound system allowing us to hear every little nuance in these songs and with Ashley Ennever, on loan from The Slow Readers Club, providing a stunning lighting backdrop, they come alive tonight. We know all about their abilities in small dark rooms, but this is a big stage to play on and they come alive and thrive.

They open with You're Mine, a new song they're recording for their debut album, jagged bass and guitars, pounding punishing drums and Adam's rich baritone voice emerging from a brooding intro. It's insistent, thrilling and on the edge and it's a perfect start. Jennifer's Lips has twinkling keyboard effects in the verses as the songs broods before exploding into the chorus, a menace that underpins that much of Ist Ist's work, but one that's compelling and draws you in and doesn't let go. Silence might now be two and a half years old and still is the point at which those Joy Division comparisons that dog them have greatest credence, but it feels made for big rooms and booming sound systems like this as it builds irresistibly into its ferocious chorus.

I Want To Disappear, from this year's Everything Is Different Now, is a completely different beast, slowed down, the drum beat forming the core of the song around which Mat Peter's box of electronic trickery works its magic as Adam's plaintive simple vocals deliver the plea to "talk to me" with absolutely gripping tense emotion. It's followed by Emily, an old favourite and survivor of the very earliest Ist Ist shows. It's developed, grown and blossomed with the band, Adam losing himself in the intensity of the song as it reaches the breakdown and then builds back before soaring off into the distance again.

Under Your Skin is another track from the forthcoming record. It starts slowly, builds slowly, it's claustrophobic and gripping, palpably enveloping us with the brooding feeling that courses through the verses until the chorus lifts the song. It's the sound of a band spreading its wings, confident in its skin and with each other and where they're heading. It's followed by Son Is The Father, another song where you see Adam lose himself in the words, eyes closed, arm outstretched, living out each and every syllable as he declares "everything is different now" as people sing the words back to him. 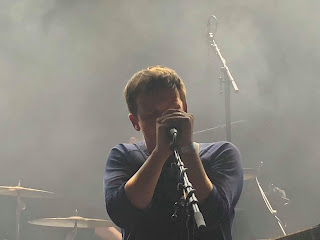 The longer set tonight affords them the opportunity to bring back old favourite White Swan, a real throwback to when Ist Ist's main weapon was their raw power. It still possesses it in spades and it delights the longer-term fans in the crowd with its steamroller backing track lifting it. It's followed by two more of their early singles - Night's Arm and Strangers - but both are now completely different beasts to the recorded versions, brimming with intent and an unstoppable sense of purpose, the latter's chorus perfectly made for the radio stations that still shun them.

If any of their debut Spinning Rooms EP songs have benefited most from their expansion from a three to a four piece then it has to be Preacher's Warning. The clarity of sound allows us to hear all the minute detail in Mat's wizardry and the subtleties of Joel's drumming in the quieter moments with Adam's booming voice dead centre, issuing the foreboding warning of the song. I'm Not Here from the same EP benefits similarly though from their expansion of their horizons. Agitated, edgy and persistent, it lifts you and carries you along on its weight and momentum as does Exist. It's an old adage, but you get the best out of the really great bands by seeing them live because you see them living the songs out and that creates a thrill that you simply don't get from listening to them on the bus or at home - and Ist Ist are the latest to prove that rule.

Undignified shows their intent to stretch the boundaries of their sound, to not allow a song to stand still but to take everyone on a journey with the four of them leading the way, one minute calm and collected, the next threatening to detonate and lay to waste everything around them. The penultimate song of the night, Black, is another that should feature on their debut album and on the basis of the response it has tonight and at previous shows, will surely be a contender for the record's lead single and perhaps the one to break down the walls of the industry that have kept them out so far. Whilst the message of the chorus is dark - "what's left is only black" - it feels uplifting and potent. They finish with Diversion, a multi-headed beast of a song that distills everything about Ist Ist into a five minute head rush - one minute eerily calm but with the explosion imminent, the next an almighty coming together that reduces everything to rubble before stopping dead then coming back to finish us off.

"It was a privilege" Andy tells us as the cheers still ring around the room and the house music kicks in. The privilege was all ours. This room has hosted gigs that people claim to have been at decades later, this might just be our modern day version of that.

Email ThisBlogThis!Share to TwitterShare to FacebookShare to Pinterest
Labels: Ist Ist, Our Fold