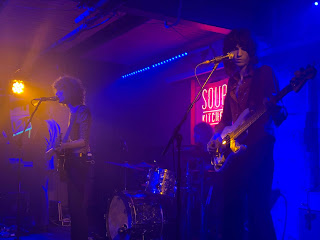 Temples came to Manchester on a wet Monday night for an out-store show at Soup Kitchen in conjunction with Piccadilly Records. Mixing six songs from their new album Hot Motion that came out last Friday with three old favourites, they delighted an attentive crowd with their summery psychedelia.

Temples' star in the eyes of the music business's movers and shakers might have waned since the release of their debut album Sun Structures when all sorts of hyperbole was thrown their way, but tonight's show and their new album Hot Motion demonstrate clearly that it's not their art that has caused this but the fickle nature of the industry and press. Hot Motion, represented by the first six songs from the record tonight, is at least the equal of both Sun Structures and its follow-up Volcano.

There's a wonderful loose and languid feel to these songs laced with beautiful luscious melodies like the four have them have locked into an intuitive groove and when Thomas and Adam add their vocals to James' lead the songs are uplifted into the night. You're Either On Something is a real standout, the highlight of the whole set, while Holy Horses runs it close, the songs given a slightly harder edge than on record, but without losing the charm that makes the record such an easy accessible listen. The crowd is a little reticent at first, not helped by the early start, but get into it as the set progresses as James slowly calls them forward.

They liven up when we get to Shelter Song and Mesmerise from Sun Structures. The former has people singing along and the latter develops into what feels like a jam session, stretching the song out and taking it far away from the original before stopping dead and then kicking back in as the band lose themselves in their music.

There's a commotion before the last song, someone shouts something from the back with the word "queer" clearly audible and an audience member at the front challenges them on it, causing the person from the back to come forward and aggressively square up to him. The band try and dissolve the tension, unsure like many of us of exactly what was said, but it's their tour manager that steps in and calms it down.

They finish with Hot Motion, which restores some of the love in the room, with the song again being taken off on a thrilling diversion that showcases the psychedelic side of the band's sound perfectly. It confirms beyond doubt that whilst Temples might not be the press darlings they once were they're still a formidable force to be reckoned with.

They played The Howl, You're Either On Something, Certainty, Holy Horses, Context, The Beam, Shelter Song, Mesmerise and Hot Motion.

Email ThisBlogThis!Share to TwitterShare to FacebookShare to Pinterest
Labels: Temples