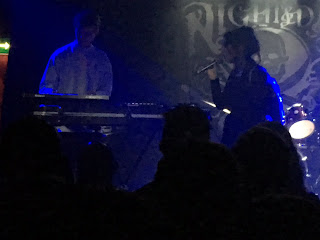 Bernard And Edith performed a one-off show at Manchester's Night And Day Cafe on Saturday night to preview five of the new songs that they've been writing for the follow-up to 2015's debut album Jem plus revisiting four of the songs from that record.
Live shows from the duo are few and far between from the mysterious duo and their social media statements about this show being an introduction to new material meant it was too good an opportunity to turn down.

The new material doesn't disappoint either. It still retains the fragility of the sound that characterised Jem and marked them out as a particularly unique proposition. Whilst they might look like strangers in two different performances at times, they're in perfect harmony when it comes to the music. On both old songs like Dagger and Heartache as well as Flames and Down By The Tree, the two standout of the new ones near the end of the set, Bernard's keyboards and guitars provide the perfect canvas for Ethel to paint her glorious patterns. She demonstrates a range that demands that the audience shut up and listen, and that we do, awestruck at times, as she suddenly takes a song and lifts it up into the stratosphere or takes it to the depths of the ocean without ever losing control, even when she's dancing around the stage and living out the words she's singing at the same time. 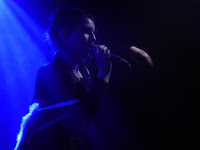 It's an intense forty-minute set, but one that keeps the audience fascinated by their next move as they give little away so engrossed they are in their own performance. A set-closing Girls Night Out does peel away a little of that mystery that surrounds them (for instance, Bernard and Edith are pseudonyms) but without losing any of that feeling that they don't want to fit into any scene or genre and operate under any rules but their own.

Email ThisBlogThis!Share to TwitterShare to FacebookShare to Pinterest
Labels: Bernard And Edith