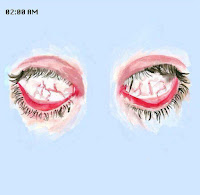 Phoebe Green's debut self-released album 02:00am is one of those records that come out of nowhere, full of an unique individuality and style of its own, unnerving in parts due to its DIY nature, but astonishing in the simple intuitive nature of the songs and the potential that oozes from every note and word.

The album details tales of teenage angst, of the uncertainties of growing up, but what's unsettling to the listener is the vivid detail in the songs; it feels like an intrusion into a diary recounting Phoebe's thoughts. The sparse nature of the instrumentation just makes the tales feel even more stark, honest and revelatory and a world apart from most music being produced by her fellow teenagers.

"You're gone, and I pretend to care, but I'm already on to another and he's sweet and kind and nothing like you" is the opening line of Nosebleed and sets the tone for the rest of the record. In that line it shows both confidence and insecurity, the uncertainty of growing up, finishing one relationship and moving to another, but telling the story with a disarming openness.

Maniac tells the story of a boy who plays the field, leaving a trail of broken hearts in his wake, but who Phoebe can see through and tries to get to let her in -"your reflection is your very worst enemy, behind the glasses an angel, but the devil's beneath." It's a brilliantly observed story of the challenges young people feel today trying to fit in with stereotypes and peer pressures to conform. Like Watercolour Envy which follows in a similar vein, the meaning of the song is accentuated by the simplicity of the canvas on which Phoebe paints the stories and the half-spoken, half-sung nature of the vocals and the way she uses her voice to accentuate those tales.

The next three songs demonstrate why this album is such a fascinating listen. Pure Blue and Sagittarius hint at expansive possibilities beyond this record. The former is reminiscent of the unfulfilled majestic promise of Coves' debut album, whilst the latter is an unashamedly glorious pop song about a crush on a player who she can see right through - "you're a scared little boy... and I'm just a scared little girl and one day you'll realise you are my world." Sandwiched in between is the five minute A Phonecall, a mostly spoken claustrophobic intense and inward looking evaluation of one of those friendships that never tips into a relationship as the two parties never broach the subject - "maybe we'll get together in a few years time" being the pay off line.

She Makes You Weak is set to an eerily dramatic and unnerving piano, the verse set in the third person about a girl who broke the subject's heart and the chorus in the first person declaring "baby, make me your everything and more, I'll be the only thing you worship and adore."  High talks in similar tones but with the situation reversed - "your skin on mine is a lifeline... let me feel like I'm yours, let me feel adored." The lyrical directness makes the album feel like you're reading a diary that's not meant for anyone's eyes other than the author's.

Drive shakes off the shackles of uncertainty of will they won't they, telling of setting off into the distance hand in hand declaring "we don't know where we're going but neither of us care."

The album's final track Isobel is a beautiful declaration of eternal friendship that transcends all the boys that have come and gone through the course of the record and returns to the age-old solution to life's problems - "you're the only one in the world who understand let's forget about high school cliques and get drunk on cheap wine." The album ends with Phoebe singing "don't forget about me" as it fades out around her.

02:00am is one of those rare records that reveals something new with every listen, and it will take a few to really appreciate it, and puts you right in the middle of the mind of its creator. Whilst the listener might interpret the stories in different ways based on their own situation, but it's a record that belies Phoebe's declaration on Isobel that "we're just stupid kids trying to figure ourselves out."  Life's hard and complicated, love's never easy and people are shit and hide behind their insecurities to protect themselves from their true feelings and from getting hurt. 02:00am understands all that and puts it to music as a soundtrack to people's lives, whatever age they are, and to the process of (never) growing up.