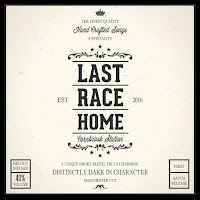 Last Race Home released not one but two singles on Friday. And we couldn't choose between them for track of the day so we're going to have both. The Manchester-based six piece have created a sound that reflects the city from which they hail - open, honest, revelatory, descriptive and dealing with what life throws at them but with an optimistic romanticism shining through.

There's a folk sound to what they do, but it's not that often dreary indistinguishable take on it, rather the way they use Denis' world-weary lived in expressive voice, make the most of both female and male backing vocals and the trumpet creates something very different in its impact on both the tracks. How Close talks of dirty back street bars and begs the question to the lady in the song "Darling, how close do you want to come?" Cornbrook Station, the bane of many Mancunians lives as the desolate exposed Metrolink changeover to the west of the city, is even immortalised in song, the lyrics telling a tale that compares the helplessness of love falling apart and being unable to do anything about it to being stuck there on a windy wet night with the yellow-coated staff nowhere to be seen as the network grinds to a halt. It's a brilliant metaphor.