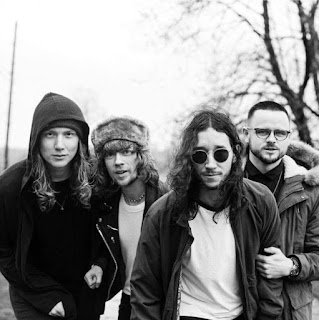 Cupids return with a new single, one of their live favourites Good Things (Come To Those Who Wait), released tomorrow ahead of a sold-out launch gig at Jimmy's in Manchester and then an extensive UK tour. We caught up with Jake from the band to find out more about the song and its video and their plans for 2017.

What's the inspiration behind your new single Good Things (Come To Those Who Wait)?

To us it's mostly about the ups and downs of being in a band. Mostly the down's but in an upbeat way.

I think it relates to most people though when they look at it through their own eyes. The chorus lyrics especially - 'Do you ever feel you life is going nowhere? So boring and predictable and relatively dull'

How did the idea for the single's video come about?

That we can't take credit for. Our friends at Glued Films took the reins with the production of the video.

We trusted them and they did a top job. I suppose we all wanted something fast paced and great quality. The black and white is really striking and the amount of footage that was shot was unbelievable. Credit where it's due they've done an amazing job. Cheers to Joe, Ben and the whole team who worked on it.

You're launching the single at Jimmy's, a venue a little smaller than the ones you usually play at. What made you choose there?

We just wanted somewhere different for ourselves. It's a new venue and we thought it'd be cool to give it a go. It is small for us but i think it's nice to play sweaty hot little gigs for a change in Manchester.

You're off on tour to support the single. Is there anywhere new you're going or somewhere you're particularly looking forward to playing?

Brighton mainly for me. I love the place. The sun is always out when we go down and it's part of the Great Escape Festival too which will be ace. There are some brilliant bands on that weekend.

Sound City in Liverpool too should be great. Again, Liverpool is an amazing place. The weather is shite though like Manchester. Hope the sun is out when we play.

You've released a number of singles over the past eighteen months. Will we see a Cupids album at some point?

Eventually yes as I'd like everyone to hear the obscure stuff where we're not restricted by stuff like song times or the requirements you need for singles.

Album tracks (like B-Sides) let you show a different side to the band. Some of my favourite tracks by my favourite artists are B-Sides and album tracks.

Mainly releasing more singles and gigging as much as possible for us. I'm really excited for everyone to hear it all.

Good Times (Come To Those Who Wait) is out tomorrow (March 31) when Cupids play a sold-out show at Jimmy's in Manchester. They also play the Night And Day on April 26.