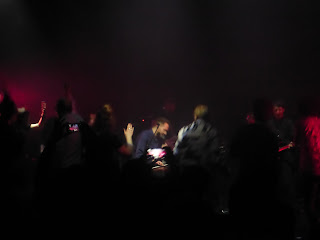 The Sold Out signs are up on the door of The Dancehouse for Dutch Uncles' triumphant end-of-tour homecoming celebration of the release of their fifth album Big Balloon as the initially seated and eventually stage-invading crowd flocked to pay homage to a band with an impressive following and a joyous live set despite their outsider status compared to Manchester's big boy bands.

It's nine years since Dutch Uncles broke onto the scene with their self-titled debut and since then they've released three further albums Cadenza, Out Of Touch In The Wild and Oh Shudder, each one defined by their own sound, unmistakably them, but never simply rehashing the same old lines chasing former glories. This year's Big Balloon followed in similar vein, very much a Dutch Uncles album but a progression, a new angle on themselves.

As you'd expect that album features highly in the set with seven of its ten tracks making up the eighteen song list that touches all bases before it. Such is the love for this band that it's hard to distinguish the love for the new from that for the old, a telling sign that you don't just like the odd Dutch Uncles track off the radio, it's all or nothing.

Anyone who's witnessed Dutch Uncles in the flesh will know that Duncan's dancing forms a centrepoint of the set, losing himself in his own inimitable style, even if it's for five seconds stood back from his keyboards. It appeals to the awkward, to our inner geek, unable to dance ourselves, and warms us to them even more. The between song chat just exacerbates this, the introduction of a couple of friends who've just got engaged and the dedication of the anything but love Babymaking to them, a story about "a wanky ghost", the pulling of their reluctant tour manager on to the stage or the playful messing behind the drawn curtain before the encore. 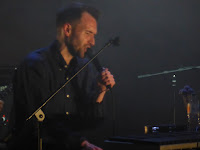 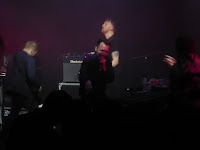 It'd be a shame though if this took away from the fact that Dutch Uncles are a formidable live band. The six-piece have to fight a muddy PA, but come out on top, those fluid infectious grooves, unpredictable chord changes and switching instruments winning through, whether it be the new material which shines brightly, in particular Oh Yeah, Hiccup and main set closing Big Balloon or the more familiar likes of Upsilon, Face In and Cadenza, all of which feel invigorated and given fresh life.

Their final song Dressage sees a mass stage invasion, after Pete had performed a one-man crowd invasion up one bank of stairs and down the other just beforehand. But rather than pose for selfies or get in the band's way, people just dance as if they're meant to be there, which in a way they are.

Whilst they might not have garnered the commercial and critical acclaim of some of their (in our humble view inferior) contemporaries, that matters not one iota to the 750 devotees in the room. The roar at the end of the set tells its own story, that Dutch Uncles are one of the city's best loved and most adored bands by those fortunate enough to have crossed paths.