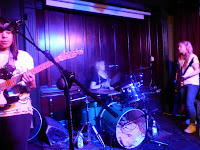 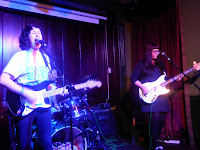 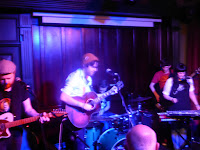 Peaness's first Manchester headline show is also their first since signing to Alcopop Records earlier this year and the sold out signs on the door and the reception they get at the end of a boiling hot forty five minute set tell the story of a band on the rise, armed with three minute guitar pop gems with a hard underbody to them that stick to your brain and don't let go. Support came from Wrexham's loud and direct four-piece Baby Brave and Llangollen's Campfire Social.

Campifire Social are a five-piece from the local scene around Chester and North Wales that spawned Peaness and there's a refreshing camaraderie between the bands tonight, helping each other set up and being down the front supporting them properly too. Their sound is an interesting mix of styles, reminiscent of early Magic Numbers in parts, particularly when Thomas, Chris and Carrie's vocals all come together and they're clearly having a ball up there too. Their songs take the listener on a musical journey, jumping effortlessly from pace to pace and style to style without veering too far off track. The Ocean, The Sunshine And Me and their recent single Nothing, Nowhere, Never, Now are two highlights as is a new song that's so new they tell us they're going to take suggestions at the merch table for its title. 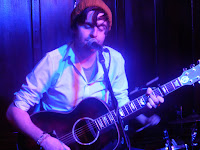 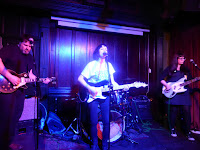 Next up are Baby Brave and they've turned everything up to the point that for the first song it's hard to hear Emmi vocals, but that's quickly resolved as they run through a set that builds in intensity as it progresses as Steve and Sian get more involved and animated and contribute more in the way of backing vocals as well. Songs like Alone In Tokyo, Rock Paper Scissors and Baby Behave are energetic, powerful and fun songs and Emmi's infectious performance starts to rub off on the crowd that's now packing out the room and making us all hot and sweaty. The energy that Baby Brave create is undeniable even to those who haven't seen them before. 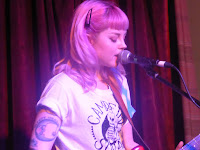 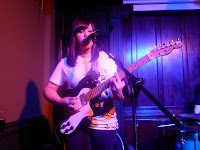 You sense for a while that Peaness still can't believe that this is happening to them, but they're not standing where we're standing. Rach (drummer, newly armed with a microphone), Balla (guitars and vocals) and Jess (bass and vocals) throw glances at each other throughout and burst out smiling first at each other and then at us, unsure as to quite why this is happening.  The songs are the reason, Peaness don't try and over complicate things, throw big shapes and experiment, but they don't need to. The likes of recent single Same Place and its b-side Seaform Islands are a case in point, a guitar hook line (and every song has one that sounds similar but never the same to hold our attention on songs we've never heard before), shared vocals either together or as a call and response between Balla and Jess. The headline set also means they go back and resurrect old favourite Oh George, a song about our former Chancellor of the Exchequer. 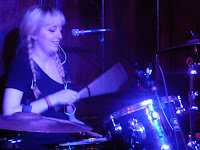 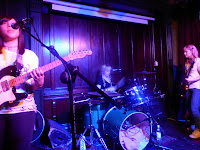 There's new songs too as you'd expect for a band that's just been signed and planning an EP release for April. Skinsurfing will appear on that 12" single and it's easy to see how the increased confidence that goes with being signed and getting ever more frequent and bigger responses like they do tonight is rubbing off on them. Jess doesn't stop smiling other than when she nearly gets smacked in the eye by a mic stand knocked over from one over-exuberant dancer in the front row. Another new one, called Ugly Veg we think, feels like a band starting to realise their own potential and expand their horizons without losing sight of what made us love them in the first place. Tonight there's no hilarious cries about loving their name, just dancing, hushed adoration and the realisation that this is the time that Peaness are coming of age and as one of them says becoming "a proper band."