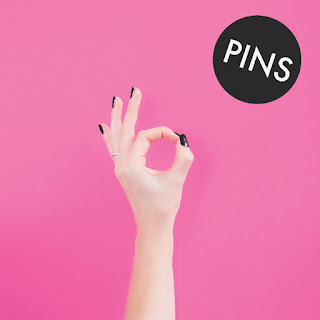 PINS latest five track EP Bad Thing, their first release since last year's RSD single Trouble and 2015's Wild Nights album, is a diverse set of songs, featuring Iggy Pop on one song and a cover of Joy Division's Dead Souls as another as well as three further songs that see PINS take various routes at reinventing their sound.

The title track opens up the EP and whilst the trademark PINS sound is still there, it's a rounder, less raw and jagged take on it. They still make brilliant use of backing vocals to lift the song, and there's a defiant "Everyone says we're no good, we don't do what we should" message in the lyrics, a nod to PINS' gang mentality that sees the five of them hunt as a pack. The chorus "you say that I'm bad, like that's a bad thing" underlines that defiance with a definite sense of mischief.

Aggrophobe sounds nothing like PINS have done before musically, even before Iggy Pop steps into the breach, think John Cooper Clarke on Inspiral Carpets' Let You Down for the style he adopts in the verse, before the chorus sees PINS join with him in the line "so many actions, so many voices." It's a weird but wonderful song that sits well apart from the rest of PINS' catalogue though.

Recent single All Hail is the closest you get to the PINS we've grown to know and love since they released Shoot You Down in 2011. Delicious harmonies, insistent jagged guitar hooks and Faith's voice taking centre stage and taking no shit.

In Nightmares shows a more experimental side to PINS though. It starts off a little more dark and menacing, Faith exhorting "my nightmares have come alive, eating me from the inside" and creating a claustrophobic atmosphere that the backing vocals serve to heighten. Around two minutes thirty in, it goes off on a tangent with vocals deep in the mix before coming back in and then heading back out in the opposite direction. It's not quite what you'd expect from them, but it's really rather good. The final track is the cover of Joy Division's Dead Souls and it is what you would expect a PINS cover of it to sound like. It remains true to the original, but has a little more light and shade, both in the instrumentation and in Faith's voice.

Bad Thing feels like a transitional record for PINS, coming as it does between albums and with Kyogen now on board as a full time member of the band. It hints at many potential different future directions for one of the country's most underrated yet consistently exciting bands, yet still feels like a coherent and fresh piece of work in its own right that demands you go back and listen to it again.