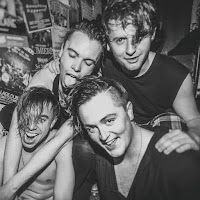 Otherkin's new single Bad Advice is the latest track from the Dublin four-piece's forthcoming debut album and is a ferocious two minute twenty second assault that pulls no punches and never takes its foot off the pedal from its riotous start to the moment it stops dead in its tracks at the end.

Otherkin are Luke Reilly (vocals, guitar), Conor Wynne (guitar), David Anthony (bass) and Rob Summons (drums) and they formed in 2014, making a name for themselves locally before spreading their wings. The song is the follow-up to last year's well-received singles Yeah I Know and I Was Born and continues in their stated ambition for their songs to be "straight in, no kissing." The short sharp shock of Bad Advice certainly does that.

The single coincides with a UK tour that calls in at Jimmy's in Manchester on Wednesday night as they prepare for the album release.

Email ThisBlogThis!Share to TwitterShare to FacebookShare to Pinterest
Labels: Otherkin