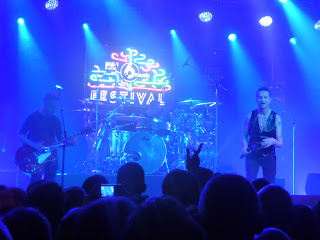 Depeche Mode's twelve-song set at the legendary Barrowland venue finished this year's 6 Music Festival with a real bang as they mixed songs from their recent album Spirit in with classics from Violator and other post-1990 albums on a night that will prove to be unforgettable for Depeche Mode fans who had made the pilgrimage from across the world to view this most intimate of shows.

After James Lavelle had warmed the crowd up, not that it was needed either in the sweltering furnace of the venue or in terms of anticipation, Depeche Mode took to the stage just after 9 to an almost deafening reception and a sea of arms. They opened with two songs from Spirit - Going Backwards and So Much Love - and it's immediately clear, from both band and audience reaction - that it's a record that proves Depeche Mode are still relevant in an age where they have many imposters trying to create vibrant electronic music yet in which none of them come close to the mark. Going Backwards' lyrics talk of losing control and going back to a caveman mentality, a clear reference to Brexit and the surrounding return to less open values that characterised the age in which they grew up. It's a subject matter close to the hearts of a band that's embraced its global fan base and, like the equally direct Where's The Revolution later in the set, it shows a band that's not afraid to make its voice and opinion heard and put noses out of joint.

Although the record has only been out nine days, it seems that everyone in the place knows every word and sings them back at a volume that often threatens to drown out the band themselves. It's a sign of a band that's still relevant, the sound is unmistakably them, but it's darker and harder edged and possibly less immediate than the Violator tracks that sit around it in the set. The adoration for them is undeniable so much so that until you get the final trio of Walking In My Shoes, Personal Jesus and Enjoy The Silence and the place erupts even more, it'd be difficult for someone walking into the room to distinguish the brand new from the other tracks.

Dave Gahan is on fine form too, strutting the stage confidently and extrovertly as ever, but with a cheeky knowing smile on his face most of the time, making eye contact with his devotees in the front row, pointing at people and generally avoiding most of the pitfalls that leaders of a stadium band tumble into. More importantly still, it looks like he's having just as much fun as we are, perhaps down to the fact he can see the whites of our eyes rather than us being thirty feet away in a football stadium. He departs half way through the set to allow Martin Gore to sing Home and returns to find the audience singing the refrain back to him.

The main set ends with Personal Jesus and a communal singalong with strangers hugging each other, arms round shoulders and this time actually drowning them out. Recently the NME ignored Violator in a list of the most important 100 albums of the 1990s when in any sane person's list it would be a contender for the very top. Like Enjoy The Silence, which is given a loose jam-style end section after the audience have needed no encouragement to take the chorus and make it their own, these are songs that mean everything to the band's fans, young and old and you can see they've bridged generations, you see people letting go of any inhibitions and throwing themselves into the music. It's a rare gift for a band to be able to do this for so many people.

Despite calls for a second encore the house lights go up and we can take our first proper breath for an hour and quarter and reflect on what we'd just experienced. Without the need for an extravagant stage set up (although the lights and sound at the Barrowland are just about the perfect), Depeche Mode proved that they are still one of the most invigorating, dynamic and relevant bands going even after over thirty years in the business.

Depeche Mode played Going Backwards, So Much Love, Corrupt, A Pain That I'm Used To, World In My Eyes, Cover Me, Home, Where's The Revolution, Barrel Of A Gun, Walking In My Shoes, Personal Jesus and Enjoy The Silence.