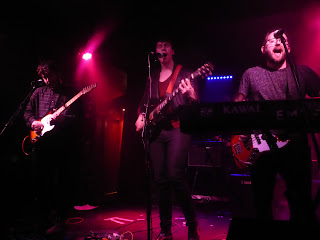 It's been almost eighteen months since Embers last graced the stage and that was after a similar length hiatus and we feared they'd gone. Now, hopefully free of the shackles of the business side of the business, and with a new drummer on board, they're back and they started off low-key with a support slot at the Night And Day. Their Manchester fan base though picked up on it and they played a six-song set of new and old songs to an ecstatic response as if they'd never been away.

They start with Part Of The Echoes, the expansive single that won them so many followers back in the heady days of 2013, when they were the band on the lips of every excited gig-goer in Manchester. And it's still as imposing, uplifting and simply huge in both ambition and reach as it was back then. Since then we've only had The Bitten Tongue, the second song they played tonight, back in late 2015 to sate the desire for more. Similarly, live as well as in recorded form, it's a song that stretches both band and listener rather than resting on their laurels and it's why Embers have been so missed because their aim is high and they hit the mark. There's the odd nerve evident, not surprising given they haven't played a gig in over a year and it's a debut gig for their new drummer Dan, and an uncertainty as to how they'll be received, but the first two songs sweep that away.

It's a clever move starting with two songs we know as it leads into the new material they've been burrowed away writing over the past year or two, frustrated at being unable to unleash it upon us. The good news is that they haven't lost their ability to craft songs with the requisite tug at the heartstrings and soar at exactly the right moment to lift the listener up with the power of the music. Adrift and Drowning are very different beasts, on the latter George takes to the keyboards rather than guitar, but they've got the Embers DNA running through it like the name on a stick of rock.

The creative spark doesn't appear to have been dimmed by their time in the shadows, as they demonstrated recently with their comeback single Signs which is the evening's penultimate offering. It feels like a very natural follow-up to Part Of The Echoes in the way it's not content to just be a song hemmed in by traditional boundaries, it's seeking to break out, let loose and lift us all up as the guitars, drums and keys collide in the breakdown and then come together.  They do save the best for last though, despite their protestations that they shouldn't play a new song last. Until The Dawn simply rolls back those borders yet further and expands Embers sound and reach into new territory and as it reaches its ecstatic conclusion, the band are lost totally in what they're doing.

It's great to have Embers back. Let's hope that this time they stick around and deliver everything we've hoped from them since those tiny shows four years ago made them the most exciting band in town.