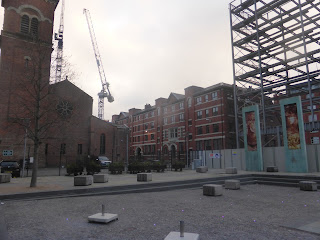 There's a lot been written about Ancoats being one of the coolest and hippest neighbourhoods in Europe by local, national and international press. Well we live there, we think it's a great place to live but we think it's nothing of the sort.

For a start, if you don't like building site chic, and it feels like there's more square feet under construction than resided in, then you're already struggling. There's a running joke amongst Blossom St residents that we'll wake up one morning and be cut off from the rest of the world such is the scale of works at present and the threat of more to come with demolition around the Edinburgh Castle and the old powerstation on Great Ancoats St on the agenda.

So what else suddenly makes Ancoats hip? Rudy's is the main pull into the area, and the pizzas are indeed worth the trip and the two hour wait you're often faced with and the locals will smile at you peering at Google Maps to find its unassuming location in a building that's 80% car park. The bars - Second City and Seven Brothers - are excellent, the former a bustling sports bar with ultra friendly staff, the latter a real ale place that doesn't sneer at lager drinkers. But neither are what you'd class as hip, whatever that is supposed to mean, and both have alternatives back in the Northern Quarter. 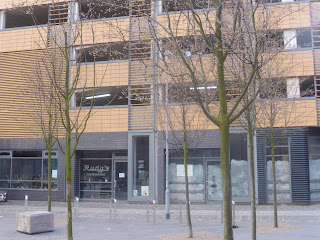 What else is there? A Japanese tea shop? Seriously? Ancoats Coffee Co? The coffee is excellent and it's a really great location to relax but again there's plenty of places back in the Northern Quarter where you can do that too. A restaurant, Squid Ink, with one set of choices on the menu and seemingly random openings? Great, if you find a time it's open and unless you don't like one of the courses. There's the high protein cafe Kettlebell Kitchen which isn't the fatty-unfriendly zone we feared when we first went in despite the body beautiful clientele it's aimed at and the food was good too, but we are hardly talking Kreuzberg, Williamsburg, The Mission or even Shoreditch here, just entrepreneurs with great ideas. Add to that Mexica that took over from the New York Times cited Cutting Room which, with random opening times that bear no resemblence to those in the window, looks like going the same way with a lack of customers and reports of bland average food, even from the MEN, which was something of a first, and the Ancoats General Store which boasts a wide selection of beers and another coffee shop. Around these sit units that have been empty for the three and a half years we've lived here unless it's some form of urban art exhibition that's passed us by.

And that's about it. It's funny watching Japanese and American tourists walking round with bemused looks on their faces, avoiding the latest fencing that's been erected and the cars on the pavement (as parking has clearly been an afterthought) and more likely to be hit by one of the Audis and BMWs that speed through unmarked junctions in the maze of streets than they are to meet the next Andy Warhol, and wondering where all the hipsters are that they've read about and whether they've simply taken a wrong turning somewhere and there's a mythical colourful Ancoats hiding just around the corner teeming with markets, cool bars and beautiful people. 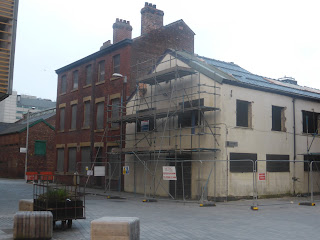 There's nothing being built here that will add to the cultural fabric of the area either, save for the debatable modern design of the Halle St Peter extension that will impose further onto Cutting Room Square, the supposed centre piece of Ancoats Urban Village which will soon sit permanently in shade even on the rare sunny days we get in Manchester, and hiding the stained window that's rumoured to be the inspiration behind the James daisy (as the band rehearsed in the area at the time it appeared on their t-shirts, which feels like it's aimed as much at increasing revenue generating events such as weddings as it is at the artistic offerings. Deeper into Ancoats, Sankeys and the rest of Beehive Mills has also been lost as has most of the cultural heritage of the area such as The Smiths Arms. It isn't just over the city in Bootle Street that our history is being vandalised and destroyed in the search of profit. Even the stunning bird mural that's brightened up the entrance to the area is set to go.

It feels like there's a big sell going on to justify hiking up rents, making hay while the sun shines and before supply starts to outstrip demand in the race to erect buy to let apartments out of the price range of the locals. Whether the expected growth in food and drink establishments under the oft spoken of Ancoats Food And Drink Strategy will actually deliver results will be interesting to observe given the still ceaseless rise of new places in the Northern Quarter, closer to transport links and in more familiar territory. Add to this the local paper's insatiable desire for stories that will get people to click through them every time some out-of-towner spends five minutes here and declares Manchester to be the next London and tries to tell the world this, it's quite an impressive story that's being built, but one that when you look at the reality is much more myth than anything else.

Don't get us wrong, we love Ancoats, it's a great area to live, despite the building works, and the shops, bars and restaurants here are generally good, and mostly excellent, but its reinvention as some sort of cultural hipster centre is a little bit embarrassing and won't get any better with the erection of new look soulless multi-storey buildings with yet more retail outlets that Manchester probably doesn't need.