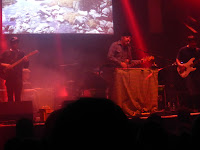 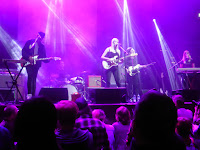 Grandaddy's first Manchester show for five years was in support of their first album in eleven Last Place and they took the packed Albert Hall crowd on a nostalgic trip through their back catalogue as well as showcasing four tracks from the new record. Support came from Amber Arcades.

Amber Arcades' set goes down well with the growing crowd despite them suffering with a bass-heavy sound for most of their half-hour on stage. Their set focuses around last year's album Fading Lines, but near the end recent single It Changes is brought to glorious life in the live arena. Annelotte's voice hangs just underneath the mix of instruments to create a sound that has an intoxicating effect once the sound issues are resolved. They're an excellent complementary band to the headliner and the warm reception they get at the end of their set confirms this. 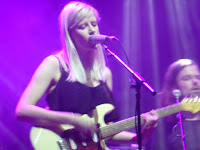 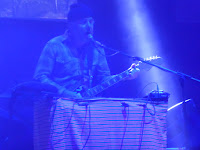 It's a tough call for Grandaddy how to handle setlists these days. There's a guy behind us who sings every word of every song word perfect and tells his mate the story behind each of them in geeky detail except for the four new songs when he stands stock still or talks to his friend. The roar that greets He's Simple, He's Dumb, He's The Pilot and the show-closing Summer Here Kids is deafening and finally there's movement in the audience, but the beauty of Grandaddy has always been that there's a linear relationship between their songs, not that they sound the same mind, just a distinctive approach from Jason Lytle and his reunited band that runs through from their debut Under The Western Freeway through to the likes of Way We Won't and Evermore from Last Place.

As you'd expect Lytle doesn't say too much throughout, joking at one point that he feels like a caged animal by the keyboards that surround him and before starting the encore of The Boat Is The Barn commenting that he didn't know how well this would all turn out and thanking us all for coming. It might seem like small talk to most artists, but this is a man who spent years delivering his majestic art with a lack of communication other than through the music. Tonight, as ever, it doesn't seem to matter though, as that music, both old and new does all the talking for them, set to an atmospheric carefully selected set of film imagery on the back that portrays open landscapes that match the nature of the songs.

Therein lies the beauty of Grandaddy, tonight they don't try to blow us away, the sound is in fact way too low to mask the singing through the hits or the talking through the new ones, but they try and succeed in seducing us with the vulnerable, fragile quality of their songs and they succeed every time as acknowledged by the outpouring of love from crowd to stage.

Grandaddy played Under the Western Freeway, Hewlett's Daughter, "Yeah" Is What We Had, Laughing Stock, Way We Won't, The Crystal Lake, So You'll Aim Toward The Sky, Evermore, Lost On Yer Merry Way,A.M. 180, I Don't Wanna Live Here Anymore, Jed's Other Poem (Beautiful Ground), Now It's On,  He's Simple, He's Dumb, He's The Pilot, The Boat Is In The Barn and Summer Here Kids.