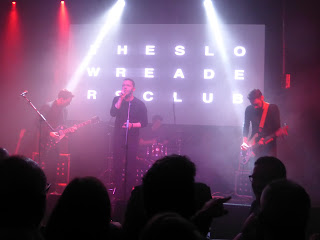 The Slow Readers Club began their first major headline tour with a packed out show at Liverpool's beautiful Arts Club supported by Folkestone's finest Skies. An hour-long set made up primarily of tracks from their last album Cavalcade with the addition of two great new songs and highlights of their self-titled debut sent a happy crowd out into the night singing the now compulsory READERS chant.

Skies are a two piece from Kent - Alie on guitar and vocals and Jericho on drums and vocals. They make high-energy fun music that it's impossible not to be drawn to and they deliver it with an energy, passion and a slight sense of mischievousness that makes them an intriguing stand out and a great live band. Their new single Afterwards is a great start point for anyone wanting to get into them but with songs like last year's single Leave Me and their final song Drone, there's plenty more to get excited about. They get a great and deserved reception from the growing crowd as their set finishes and they head off to dispense their now legendary free stickers to everyone and anyone. 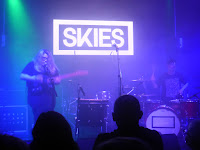 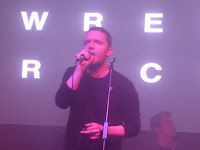 "READERS READERS" is the chant that greets Aaron, Kurt, David and Jim as they come out to face the 500 or so that are now crammed into the stunning venue. They start with Fool For Your Philosophy off Cavalcade which would have made a fine single, but that's what makes The Slow Readers Club such a potent band live and on record; everything feels like it could be a single, but without each song simply being a remake of the one before it.

Sixteen months ago, they played to just thirty people round the corner at The Magnet, now they're on the brink of a really significant breakthrough with a pretty much sold out tour despite still being without management and a record deal or a new record to promote. If the two new songs they play tonight - Lunatic and Through The Shadows - are any indication though, none of that will be a concern by the end of the year. Both are unmistakably them, but also demonstrate that they're still developing as a band.

The older songs from their debut feel even more fresh and vibrant as they did back in 2011 when they came out. It's a mystery how Sirens, One More Minute, Feet On Fire and the surprise addition of Lost Boys didn't have an army of labels chasing them down, but tonight they allow The Slow Readers Club to flesh out their set rather than just hit and run with Cavalcade. Add to that the run of spectacular singles from that record - Start Again, Don't Mind, Forever In Your Debt, Plant The Seed and a euphoric I Saw A Ghost - and you see why the bouncing masses down the front don't stop bouncing throughout.

Aaron's voice has grown so much in the last two years, no doubt buoyed by the confidence of the huge shows they played last year, but he's imparting something now that has to battle against crowds singing back every word to him, which they do lustily throughout when not bellowing that chant. Kurt, Jim and Dave have undergone a similar evolution - the band that played the likes of The Castle, Night And Day and Band On The Wall are now ready to go massive.

The Slow Readers Club played Fool For Your Philosophy, Sirens, One More Minute, Lunatic, Start Again, Days Like This Will Break Your Heart, Don't Mind, Lost Boys, Plant The Seed, Through The Shadows, Feet On Fire, Forever In Your Debt, Cavalcade, I Saw A Ghost and Know The Day Will Come.